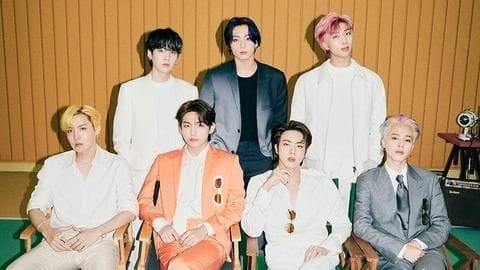 Korean boy-band and international sensation BTS dropped their new English single Butter today. Fans of the band, the BTS ARMY, were waiting desperately since its announcement, (For perspective, the live countdown to the premiere was watched by over 2.5mn!), and must say, they weren't disappointed. For this track, BTS experimented with their music and presentation, and it hits the right spot. Here's our review.

Music
A smooth audio-visual treat for the BTS ARMY

They keep it fresh for their audiences by mixing K-pop with some rap beats. The music is foot-thumping, and will make you dance, along with the septet. The lyrics are also on point. Sample this: The start is "smooth like Butter, like a criminal undercover..." Oh don't miss the section dedicated to the ARMY.

Video
Experimenting with sexy, not just cute: The video is bomb!

The video is more impressive than the song. BTS, known for their colorful videos, starts this one in a sexy black-and-white tone. The band not just kills it with their moves, but their expressions scorch the screen. It almost feels like a coming-of-age video, because the band breaks their mostly cute K-pop band image, to get into a smoldering kind of a look.

Production
The production is impeccable and conveys the grandeur

BTS switches from black-and-white to color, smooth like butter (!), and gives a reminder to their audience that they are not changing, but experimenting. The production, camera, set ups, like most BTS videos, are top-notch and almost impossible to fault. But the butter on the pancake is the final sequence. The grand stage with those killer moves is a treat for the eyes.

To recall, their first English single Dynamite earned them a Grammy nomination, and became an international obsession soon after the premiere. Released in 2020, the song hit 1bn views on YouTube in less than a year. Before that, their single Boy With Luv (feat. Halsey) achieved that feat. Butter will soon take over, as in less than two hours, it garnered over 26mn views.