'Don't Go Yet': Camila Cabello nails it with sultry moves 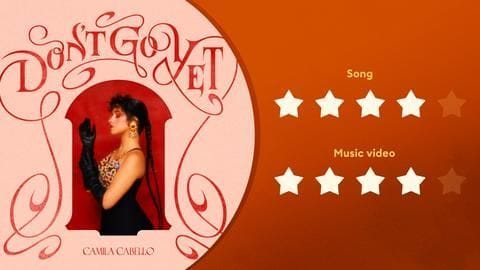 Camila Cabello is back with Don't Go Yet, which released today. This peppy number is her first single of this year and it is going to be added to her upcoming full-length album, Familia. As the title suggests, the music album is about family, but lyrics of this song say something else. Also, the Señorita singer looks gorgeous in the video. Here's our review.

Music Video
What happens in the video?

Let's just say this music video brings a smile to one's face. Coming straight out of a telenovela, Cabello is seen driving a vintage car and reaching her family mansion. Everyone is dressed in vintage yet colorful outfits and then, they all begin to dance, sing and enjoy the song. The Cuban-Mexican crooner nailed it again with her classy yet sultry dance moves.

Meaning
Through her words, she urges her lover to stay back

Although the video shows that it's centered around a family gathering, the lyrics are about stopping someone from leaving her. Through her words, Cabello is trying to seduce someone so that he/she doesn't go. "We find a corner, then your hands in my hair" and "Baby, don't go yet, 'cause I wore this dress for a lil' drama" — are a few passionate lines.

Reaction
Netizens give a big thumbs up, call it the 'summer-anthem'

Cabello scored in every department: Looks good in her dance sequences and her voice is silky smooth. Even netizens have gone crazy after watching the video. One wrote, "This song is a fiesta vibe," while another said, "This woman has become the summer-anthem maker!" Many praised the video for giving it a vintage feel and several fans called the singer an "artist."

Cabello's last album, Romance released in 2019, and it sat at the third rank of Billboard 200 charts. Don't Go Yet comes after two years, but she has retained that magic all along. It is a fun music video with wonderful singing, which has the potential to rank high on the music charts this year. Verdict: 4 stars each for song and MV.