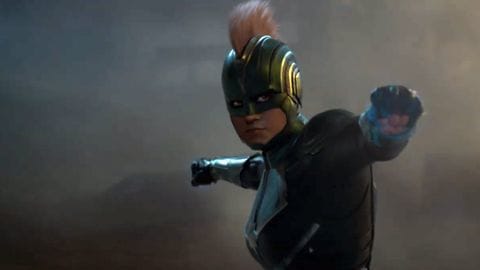 Captain Marvel is coming on March 8 and not only is she going to become MCU's strongest Avenger, but is also all set to open up a whole new universe to explore. Bringing the Kree-Skrull interracial alien war to the screen, Marvel just released a new trailer about their latest superhero played by Brie Larson. Here we dissect the trailer, which also brings back Phil Coulson.

The latest trailer was released during the National Championship college football game on ESPN. The trailer delves deeper into the relationship between Larson portrayed by Carol Danvers, aka Captain Marvel, a pilot turned superhero, and Samuel L Jackson's Nick Fury, head of SHIELD. Peppered with light banter, Danvers explains the Skrulls' plans of invading Earth, to Fury and shows she can handle herself in battle.

One of our favorite points was seeing Agent Phil Coulson again. Of course, he looked much younger than when Loki killed him in Avengers. However, it feels nice knowing Coulson will be with Fury in this film. Danvers' memory, however, doesn't seem to return, as training sequences with Jude Law portrayed by Kree warrior, shows she cannot remember her past or source of powers.

The trailer tastefully refers to the film's setting in the 1990s as Fury tells a leather-sporting Danvers that grunge is a good look on her. However, despite the light tone the trailer establishes between Fury and Danvers, there is a genuine tone of amazement in Fury's voice once he sees her fight. He confesses to his colleagues, "I've never seen anything like her".

This scene might seem humorous as Danvers shoots a photon blast from her hand to prove to Fury she is not a Skrull, who she claims cannot shoot photon blasts. However, we learn that shape-shifting is the best Skrull power. More importantly, it establishes how Danvers is in absolute control of her powers, as the blast goes by Fury hitting a shelf behind him.

Personal
Concluding with Binary powers, the trailer has us excited

The trailer concludes with another look at Captain Marvel's Binary Form as she fights in outer space. Although we had seen this part before, the new look combined with the fight sequence is making us really impatient for the film to hit the theaters.