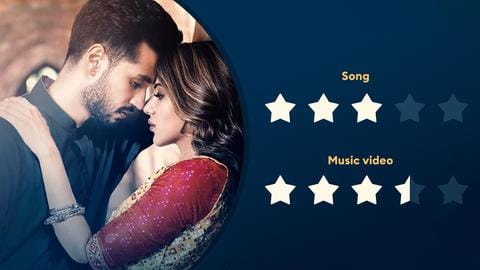 Arjun Kanungo, who shot to fame with his song Baaki Baatein Peene Baad, is back with another single. Titled Dil Kisi Se, the song dropped today and has already managed to gather more than 2 lakh views in a few hours. The video features him and Nikki Tamboli, and for the first time, she got a lot of scope to emote. Here's our review.

Details
Kanungo packs his suitcase, Tamboli stops him from leaving

The video starts with Kanungo packing his suitcase, and Tamboli arriving in a car. After getting out, she runs toward the house. Kanungo, in the meanwhile, comes out of the door and is stopped by Tamboli. We understand that they are on the verge of a breakup, but the girlfriend doesn't want it to end. It then takes us to their first meet.

Breakdown
As per the video, Kanungo, Tamboli's characters meet in college

The setup looks like a college atmosphere, where Kanungo is strumming his guitar, and is surrounded by his classmates probably. Tamboli arrives there with her friend and looks at the singer with admiration. She then makes her way to sit beside him and mocks Kanungo by pretending to sing and use a guitar. With time, they come close and start dating each other.

Video
Kanungo spots Tamboli with another man, his heart breaks

We then see them arguing, and soon after, Kanungo spots Tamboli with another man at a party. His heart breaks and he comes back to his home and packs his suitcase. The scene we see in the beginning gets repeated here. Tamboli tries her level best to stop her boyfriend from leaving her, but the adamant man leaves, kissing her on the forehead.

The video's concept is simple, even though we don't understand what they argued about in the first place. Production by One Mind Music is aesthetically pleasing, but when acting is concerned, the Radhe actor needs to up his game. Tamboli puts in the effort but fails to shake us. Also, the chemistry between them is missing. Verdict: 3 stars (song), 3.5 (music video).