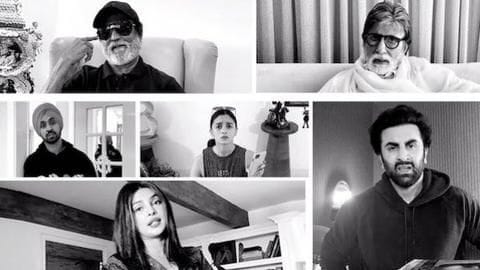 Films do not know any boundaries. Even as your favorite stars, just like all of us, remain confined indoors, they are clearly not missing out on any opportunity to keep us entertained. In an attempt to spread awareness about the COVID-19 pandemic and pass on a few quick laughs, some of India's biggest movie stars came together for a made-at-home short film titled Family.

The four-minute-long short movie brings under the same roof (not literally, of course) some of the biggest faces from Hindi as well as regional cinema. They include Brahmastra co-stars Amitabh Bachchan, Ranbir Kapoor, and Alia Bhatt; Priyanka Chopra, Diljit Dosanjh, Rajnikanth, Chiranjeevi, Mohanlal, Mammootty, Sonalee Kulkarni, Prosenjit Chatterjee, and Shiva Rajkumar. All the actors shot their part from their respective homes.

Film
The movie has been virtually directed by Prasoon Pandey

The quirky black and white short film revolves around all the actors searching for a pair of Bachchan's lost sunglasses. The movie cleverly gives the illusion that everyone in the film is present in the same house. The movie has been virtually directed by Prasoon Pandey and supported by Sony Pictures Networks India, Kalyan Jewellers, and Big B himself.

Story
What happens in the film?

After Bachchan declares that his sunglasses are missing, Diljit enters the scene in his trademark Punjabi style. He then wakes up a sleeping Ranbir, who just doesn't want to leave his bed. This sets into a motion a series of surprise engagements, where stars like Mohanlal, Rajinikanth, Mammootty, Prosenjit Chatterjee appear and talk in their respective regional languages, further confusing Diljit and Ranbir.

Details
Proceeds from the movie to support daily wage workers

Towards the end of the clip, Bachchan urges viewers to stay at home and practise self-isolation, to fight against COVID-19 pandemic. The proceeds from the short movie will be used to financially support the daily wage earners of the Indian film industry, the veteran adds. "Don't be scared. Don't panic. Be safe. This too shall pass," he concludes.

Bollywood
How is Bollywood battling the COVID-19 pandemic?

Meanwhile, Bollywood is doing its bit to fight the coronavirus pandemic in the country. Celebrities like Hrithik Roshan and Shah Rukh Khan have been spreading awareness about the disease on social media. Further, celebrities who have pledged donations for the cause include Akshay Kumar, Shah Rukh Khan, Deepika Padukone and Ranveer Singh, Priyanka Chopra, Salman Khan, Kartik Aaryan, and Kareena Kapoor Khan.