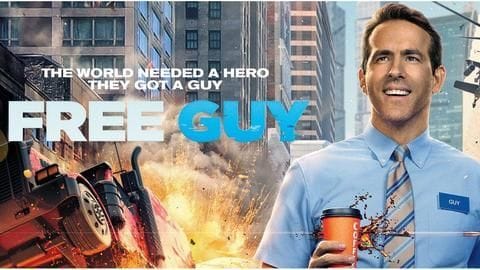 20th Century Studios has released the trailer of comedy flick Free Guy and we can't keep calm! Apart from the film featuring Deadpool star Ryan Reynolds, the trailer launched yesterday gives people just the right amount of positivity and entertainment they need direly in this pandemic-ridden world. So without further ado, let's jump to why we are so excited about this one.

Reynolds plays Guy, a bank-teller who has hard luck doing anything in "Free City." Day in and out, he gets hit by a train and run over by cars (yes, multiple cars as the trailer shows his body getting tossed around like a rag when two cars from opposite directions hit him one after another). He then comes across the sultry, badass Milly.

Milly, played by Jodie Comer, makes him realize that "Free City" is in fact an open-world game and Guy himself is a non-player character (NPC). Gamers reading this story will stop right here to have a good laugh over what happens to such characters in games such as Grand Theft Auto or Fortnite. But that's not what Guy wants to be.

Script
And then, developers announce to shut the game down

A simpleton, Guy wants to make a life with all other NPCs and decides to give justice to crimes inside the game. He becomes the good guy and even defeats baddies created by the developers to kill him. Sensing a revolution, developers announce to shut the game down in two days but Guy now has citizens of Free City and Milly, beside him.

Current schedule
The film, not yet rated, will hit theaters in December

The catchy trailer has already garnered close to 4L views after being released. The yet-to-be-rated film is scheduled to release on December 11, 2020. Stranger Things executive producer Shawn Levy is directing this film and producing it with Reynolds, Adam Kolbrenner, Greg Berlanti, and Sarah Schechter. The fun quotient of the trailer makes us hope that theaters reopen by then.