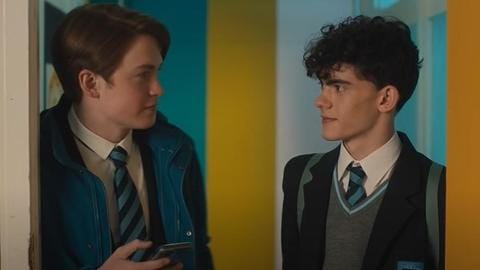 Netflix has dropped the teaser for its upcoming series, Heartstopper. This is another coming-of-age offering from the streaming giant after Sex Education, All of Us Are Dead, The Queen's Gambit, Never Have I Ever, and the like. Heartstopper will revolve around a secondary school student as he tries to understand his sexual orientation. It is set to hit the OTT platform on April 22.

Trailer
What is in store for the viewers?

The teaser, lasting 1:11 minutes, starts with a man telling Charlie Spring (Joe Locke) about a "boy" who is "waiting" for him. Right after this scene, Colors of You by Baby Queen starts playing in the background and we see how Spring develops a crush on the "boy," who happens to be his schoolmate Nick Nelson (Kit Connor), immediately after meeting him.

Information
Show is an adaptation of webcomic

The upcoming British series has been produced by Zorana Piggott while See-Saw Films is the production company. From what we could understand from the teaser, the eight-chapter-long story will follow the webcomic religiously. Like, the spilt-screen moments and the scene where some animated leaves are shown circling around the lead actors have all been taken from the webcomic. So, fans of Heartstopper comics, rejoice!

Details
All you need to know about the upcoming series

The announcement of Heartstopper, the series, was made in January 2021. Each episode in the first season of Heartstopper will have a runtime of 30 minutes. Developed by Oseman, the series is being directed by Euros Lyn. Lyn, Patrick Walters, Jamie Laurenson, Hakan Kousetta, Iain Canning, and Emile Sherman are the executive producers of the show. Its first-look images were revealed earlier this month.