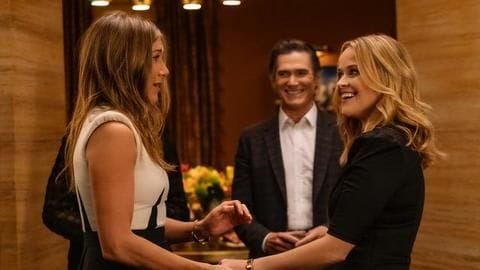 Jennifer Aniston has a lot on her plate. Fresh from the massive emotional impact F.R.I.E.N.D.S reunion had on its viewers, the actress is now looking forward to The Morning Show. The second season of the series, co-starring Reese Witherspoon, will hit Apple TV+ on September 17. A new teaser, released recently, revealed the chaos that would ensue after the shocking events of season one.

Teaser
Season 2 promises to be even more explosive

To recall, veteran anchor Alex Levy (Aniston) and newcomer Bradley Jackson (Witherspoon) decided to expose the toxic work environment of the show on National television. The 2-minute-long teaser gave us a reminder of the on-air expose that the two lead anchors had planned, and how it'd shake up the organization's ecosystem, as expected. It also shows Levy's exit, and her comeback. Promisingly explosive!

Details
Aniston feels satisfied as a producer of this show

Talking about it, Aniston said that the storyline of the gritty series is going to "very intense and emotional and complicated." As its producer, the We're the Millers star feels satisfied that everything has "fallen into place very organically." "Running the show behind the scenes, and getting the cuts, and watching it just come to life is fantastic," she added.

Cast
The new season comes with many new entrants

An audience favorite, the show will also boast of many new cast members, some of whom we got a glimpse of in the teaser. We have Greta Lee as Stella Bak, a technology whiz, who joins the UBA (the network) executive team. Hasan Minhaj, foraying into fiction, enters this season as Eric Nomani, the new co-host. Julianna Margulies also joins the decorated cast.

The new season will consist of 10 episodes that will release every Friday. Original cast members Steve Carell, Billy Crudup, Mark Duplass, Nestor Carbonell, Desean Terry, Janina Gavankar and Tom Irwin will return for the season. Based on Brian Stelter's book Top of the Morning: Inside the Cutthroat World of Morning TV, the series reveal many toxicities of the TV world including sexual misconduct.

Witherspoon first shared the screen with Aniston when she played her spoiled, younger sister Jill on the iconic sitcom F.R.I.E.N.D.S. Though she only appeared for a couple of episodes, Jill remains an audience favorite till date. She even talked about her stint on the reunion.