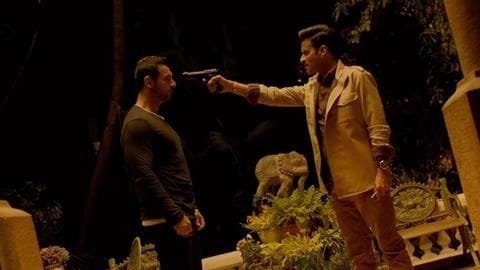 Riding high on the success of 'Parmanu: The Story Of Pokhran', John Abraham is set for another big screen outing with 'Satyameva Jayate'. Featuring Manoj Bajpayee and Aisha Sharma, the trailer of the film dropped a few hours ago and has all the trappings of a commercial potboiler. 'Satyameva Jayate' has been written and directed by Milap Milan Zaveri.

Details
The film marks John's return as an action hero

'Satyameva Jayate' brings back John in one of his most beloved avatars. The trailer has ample whistle-worthy moments and also gives glimpses of the new version of Sushmita Sen's superhit track 'Dilbar'. Aisha, who is the younger sister of 'Crook' fame actor Neha Sharma, is making her Bollywood debut with the film.

The response to the trailer is mostly positive on the micro-blogging website. Bowled over by John, Saima wrote, "I am speechless right now. You are just OUTSTANDING in it. Hats off to you Sir." "Awesome #SatyamevaJayateTrailer loved it. John will rock and I hope @BajpayeeManoj will be great as always," said Divya.

Clash
'Satyameva Jayate' will take on Akshay's 'Gold' on August 15

This Independence Day, the box office will witness an intense clash between the 'Desi Boyz', John and Akshay Kumar. 'Satyameva Jayate' and 'Gold' will take each other head-on. Also releasing on August 15 is 'Yamla Pagla Deewana Phir Se'. Talking about the clash, John said, "It's a producer's decision from both sides. I and Akshay didn't have any say in it."