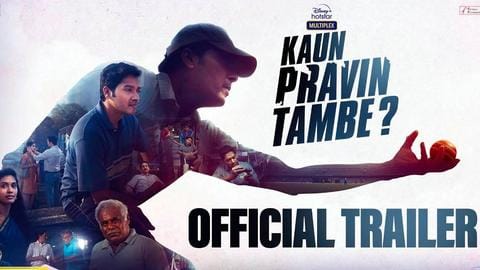 The trailer of Kaun Pravin Tambe? is here! Starring Shreyas Talpade in his second cricket drama after Iqbal (his first solo movie), the film is based on cricketer Tambe, who made his IPL debut at 41 despite having no experience in international or national cricket. Directed by Jayprad Desai and written by Kiran Yadnyopavit, Kaun Pravin Tambe? premieres on Disney+ Hotstar on April 1.

Information
What is the trailer all about?

The trailer begins with former cricketer Rahul Dravid narrating Tambe's inspirational story at an event, choosing to talk about him over the likes of Sourav Ganguly, Sachin Tendulkar, or VVS Laxman. The next few frames establish why Dravid decided to do so. We see how Tambe (Talpade) battled numerous roadblocks on his way to get just one chance to play at the national level.

Details
These are the nuances shown in the trailer

Throughout the 2:51-minute-long trailer, we see Tambe getting ridiculed for harboring the dream of playing cricket even in his late 30s and early 40s. But he is relentless as he doesn't believe that age can restrict someone from achieving what they want. Talpade literally becomes Tambe and the scene where he caresses the cricket pitch, lying on it face-down, moves you from within.

Fact
What else do we know of the film?

Actors like Ashish Vidyarthi, Parambrata Chatterjee, and Anjali Patil also get quite a lot of screen presence in the trailer and we understand that while Vidyarthi plays his coach and mentor, Chatterjee is a renowned journalist and Patil is Tambe's wife. The film, being backed by Fox Star Studios, Friday Filmworks, and Bootroom Sports Production, will release on Hotstar in Hindi, Tamil, and Telugu.

About
Who is Pravin Tambe?

Notably, Tambe had been aspiring to debut as a Ranji Trophy player since his early 20s. He continued working for this dream for the next two decades while working small jobs here and there. Finally, in 2012, Dravid (then Rajasthan Royals' captain) picked him up in IPL. The next year, a 42-year-old Tambe made it to Mumbai's Ranji squad. He retired in 2017.