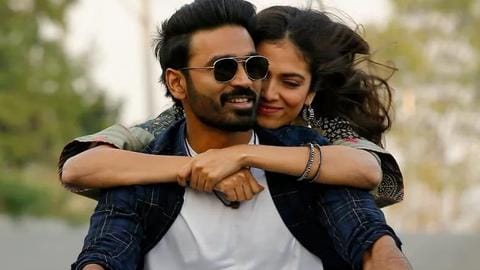 Trailer of Maaran is here! Starring Dhanush and Malavika Mohanan, the crime thriller will premiere on Disney+ Hotstar on March 11. The film will release in four languages like Tamil, Telugu, Malayalam, and Kannada. While the trailer mainly focused on Mathi Maaran's (Dhanush) investigative skills as a journalist, we also got to see his romantic side. Here's a breakdown of the trailer.

Like most trailers, this one too starts with a panoramic view of a city and the dialogues in the backdrop talk of Maaran, a "drunkard journalist." We understand that he's up against the big shots and thus is inviting trouble for himself. Dhanush appears in magazine covers first and then we see him in action fighting goons with a glass bottle, pen nib, etc.

Details
What else do we see in the trailer?

After establishing Maaran's fearsome character, the 2:09-minute-long trailer launches Mohanan's character named Thara. She works in the same office as Maaran and likes him, but "I like your sister more." Smruthi Venkat as Dhanush's sister lightens up the otherwise heavy clip. It again gains intensity when Samuthirakani is introduced as the antagonist. He plays Pazhani, a political leader. Dhanush-Samuthirakani's face-off will be exciting!

Information
Know more about the film

"It's important to stay righteous in your life, but being smart is more important"- the trailer culminates with this line. Directed and written by Karthick Naren, Maaran co-stars Krishnakumar Balasubramanian and Mahendran, and has been bankrolled by Sendhil Thyagarajan and Arjun Thyagarajan via Sathya Jyothi Films. GV Prakash has composed the music. Suhas-Sharfu and Vivek have written the screenplay and dialogues, along with Naren.

Do you know?
'Maaran' gets its own emoji!

Meanwhile, Maaran has got its own Twitter emoji, which resembles Dhanush's look from Polladha Ulagam, the first song of the film that was released on January 26 this year. Maaran is the second film of Dhanush to get an emoji after Jagame Thandhiram.

Updates
Other upcoming projects of Dhanush

Separately, Dhanush, last seen in Aanand L Rai's Atrangi Re (his third Bollywood film), will next be seen in Naane Varuven, which is being directed by his brother Selvaraghavan. Dhanush will also be seen in The Gray Man, helmed by Anthony and Joe Russo. He also has a Tamil-Telugu bilingual project directed by Venky Atluri that has been titled Vaathi and Sir respectively.