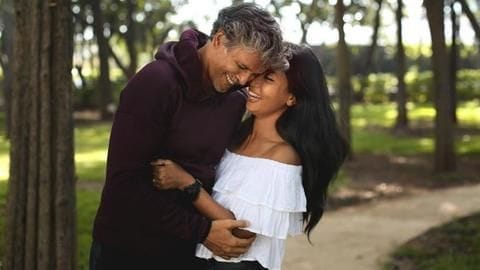 Milind Soman, one of Bollywood's most desirable men, took the world by surprise after he married Ankita Konwar in 2018, as she is 26 years younger to him. The couple received massive flak for their age gap back then. Interestingly, this difference in their age once again became the talk of the town after he revealed that Ankita "sometimes" calls him Papaji. Here's more.

In a recent promotional video, Milind and Ankita were seen reading comments made on them on social media. Amid all, one particular remark caught their attention. It said, "Ankita should call him Papaji," to which Milind cheekily replied, with a wink, "She does, sometimes." Another comment nastily said that Ankita "had her gold digging moment," by marrying the Bajirao Mastani actor.

However, both Milind and Ankita remained unfazed by these comments, and said how they are enjoying every bit of their relationship. They also addressed their age gap, where Milind revealed it's the same between him and his mother. However, age is just a number for them, they maintain. "Even if it is a cliche to say it, but I think it's true," said Ankita.

Explanation
If you aren't happy with somebody, what's the point: Ankita

While talking about their relationship, Ankita said that it's really important to be with someone with whom you're happy. "If you are with somebody like probably the whole society is really happy with, but you aren't happy, then what's the point?" she questioned. And given their perfect chemistry, the couple certainly stands true with their words, and appears to be an epitome of love.

Statement
"Everybody should be free to choose who they love"

On the other hand, Milind believes that society has created "barriers for people when they fall in love" based on race, religion, country, etc. However, he emphasized that everyone should have the freedom to choose their partners. "I think everybody should be free to choose who they love and who they like. it should have nothing to do with society," the 53-year-old actor concluded.

For the uninitiated, Milind and Ankita tied the knot in a private ceremony on April 22 last year, after dating each other for around four years. This was Milind's second marriage. The Made in India star was earlier married to French actress Mylene Jampanoi. The couple, who got married in 2006, announced their separation two years later. They got divorced in 2009.