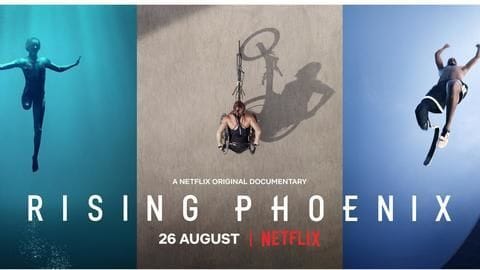 When the world is reeling under the coronavirus crisis, Netflix has brought a narrative every 'defeated' person must watch. Rising Phoenix, a Netflix documentary featuring some of the top Paralympic athletes out there, has premiered on the platform on August 26. Directed by Ian Bonhôte and Peter Ettedgui ("McQueen"), this is a lesson to perceive hurdles in a new light and overcome them.

Cast
Each of the athletes featured faces a range of disabilities

The athletes featured in the documentary have lifted themselves way above the pedestal of sympathy, which the trailer of Rising Phoenix makes crystal clear since the start. Each athlete is introduced with the spotlights focusing on their will to embrace their conditions and make the mark. Stutzman, who shoots arrows with his feet, smirks and says, "This is how I am. Merry Christmas!"

Narration
This is a story of brute power

You are humbled as you hear Vio - the first fencer on wheelchair overcoming meningitis that stripped all her limbs off - say one can never go ahead if they keep thinking why disability chose them. You are touched upon hearing Alaize, who lost his legs to war, assert how disabled people live in a system not designed for their success. Motivating, must say!

The cream
And finally, the soundtrack wins you over

Ultimately, your eyes well up as you listen to the background track of this Netflix original title. Composer Daniel Pemberton weaves power and victory within this hip-hop track voiced and recorded by disabled rappers George 'TraGiC' Doman, Toni Hickman and Keith Jones all over the internet. Doman and Jones have cerebral palsy, while Hickman, a woman of color, has her right side paralyzed.