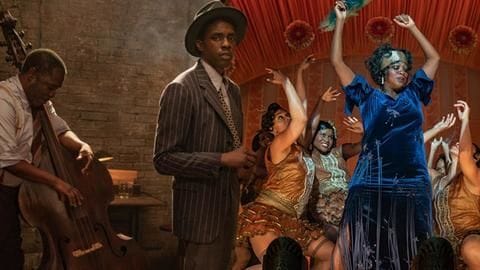 Ma Rainey's Black Bottom has released its first official trailer. This is late actor Chadwick Boseman's final film. As bad as it hurts to treasure some of the very last moments of the versatile actor on-screen, the trailer has already become a smash hit among musicians, music lovers and Boseman fans alike. Uploaded yesterday, the trailer has received over 192K views by now, unsurprisingly.

Context
The film is based on playwright August Wilson's play

The film is based on playwright August Wilson's play by the same name. The play Ma Rainey's Black Bottom is part of a 10-play series in Wilson's The Pittsburgh Cycle, which sums up the African-American experience throughout the twentieth century. All the plays have Pittsburgh as its backdrop, except for the one on Ma Rainey, which is based in Chicago in the year 1927.

About
Ma Rainey is known as the Mother of the Blues

The film highlights the various issues related to racial discrimination and exploitation of black musicians at that time. Gertrude Pridgett, popular as Ma Rainey, is considered the Mother of the Blues and hailed as the first professional blues vocalist. Wilson's play elucidates the struggles she had faced while recording her songs. Rainey was inducted into the Blues Hall of Fame in 1983.

The trailer shows the friction between different members of Rainey's band. Boseman played the role of trumpeter Levee, who gets into creative differences with Rainey and fellow band members. The trailer shows Boseman's hunger for making unique music. He is often seen suggesting ideas to veteran vocalist Rainey, who doesn't consider him worthy of attention. The ensuing clash climaxes into Rainey's popular songs.

Boseman's role was played by Charles S. Dutton on its Broadway counterpart, which grabbed a Tony nomination in 1985 in the 'Best Play' category. This Netflix film is directed by George C. Wolfe and stars Oscar winning actor Viola Davis as singer Rainey. The film will release on December 18. Other actors include Colman Domingo, Michael Potts, Glynn Turman, Taylour Paige, and Dusan Brown.