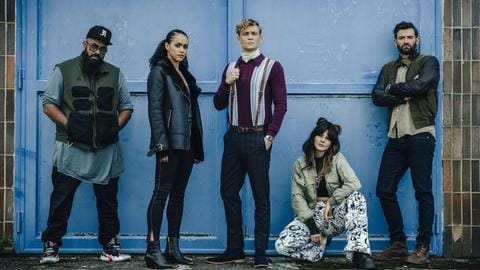 "Witness the Army before the Dead," reads a line from the recently dropped first teaser of Army of Thieves. Makers also released a brand new poster for the upcoming heist movie. Produced by Zack Snyder, the film is the prequel to his zombie sensation Army of the Dead. The film will follow one of the main characters from the Dave Bautista-starrer, Ludwig Dieter.

Interestingly, Army of Thieves has been directed by and stars Matthias Schweighöfer or the German safecracker Dieter. In the 71-second-long teaser, we see the bank teller getting recruited by the leader of a group of criminals (GoT fame Nathalie Emmanuel) to carry out a sequence of highly protected safes across Europe. This venture also stars Ruby O Fee, Guz Khan, and Jonathan Cohen.

Points
Refreshing to have a zombie film not totally about them

Now coming to technical aspects, even the one-minute clip is immensely exciting and immediately arrests your attention. Schweighöfer is marvelous as the "I've no clue what's going on" protagonist and the action sequences appear top-notch. Also, it's a nice touch for a movie to have zombies in it but not make the end product entirely about it. The movie drops on Netflix this fall.

Update
'You don't have to go to Vegas to get lucky'

Along with the teaser, Snyder also released a new poster featuring Dieter. Standing exactly on the target sign upon a huge heist map, he stares up at the camera with his hands in his jacket pockets. "You don't have to go to Vegas to get lucky," read the words on the poster. Snyder said, "Luck lives outside of Vegas," while posting the same.

Apart from Snyder, Army of Thieves is also produced by his wife Deborah Snyder, Schweighöfer, Dan Maag, and Wesley Coller. The screenplay has been penned by Shay Hatten, based on a story written and developed by Synder and Hatten. The "romantic comedy heist film" was shot during the pandemic and Snyder is working on an animated spin-off of Army of the Dead.