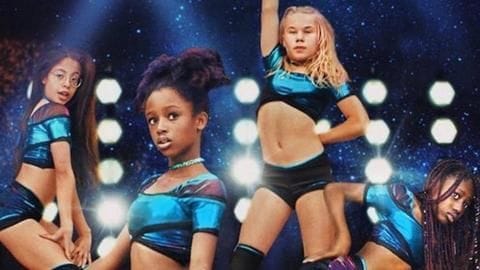 Netflix is under fire for posting, what many think is, an inappropriate image showing child actors engaging in sensual dance postures from the film Cuties. The streaming giant has since tendered a public apology for hurting people among its vast audience base, who called out the platform for varying levels of disgrace that the artwork has caused. Cuties is set for a September release.

Details
Why did the poster infuriate so many people?

In that controversial artwork and also in the film, the characters are of 11 years of age, while leading actress Fathia Youssouf is actually of that age. Their seemingly sexualized portrayal irked many as soon as Netflix released the poster promoting Cuties before its release on the platform on September 9. Social media users vented their outrage online calling out the streaming giant.

Among the infuriated users, some attacked Netflix head on for allegedly sexualizing Black actresses as young as 11. Some said they canceled their Netflix subscriptions after that infamous artwork irritated them. Taking the protest a notch up, the Parents Television Council objected to this depiction and asked Netflix to strike it off its upcoming release schedules. A change.org petition against Cuties followed too.

1/2
So, I opened #Netflix and this promotion popped up: "Cuties": about an 11yr old muslim girl pursuing her dream in a dance group, defying her parent's values.
When you call a movie "Cuties" and promote it like this: That's sexualizing 11yr old kids
Shame on you, @Netflix pic.twitter.com/R6pw3qLHAz

I don't do the boycott thing, and I think it's a little silly to consume art only from people you agree with. But @destiny4christ and I did finally just cancel @netflix. Cuties was just the straw that broke the camel's back -- they've been bugging me for a while.

Another angry user alleged that Netflix is indirectly promoting pedophilia through this artwork and the film. The concerned user uploaded a short chat with a Netflix official on Instagram, full of strong allegations against the platform. The official, however, remained neutral in their response. In its apology, Netflix said the poster "was not OK, nor was it representative of this French film."

We're deeply sorry for the inappropriate artwork that we used for Mignonnes/Cuties. It was not OK, nor was it representative of this French film which won an award at Sundance. We’ve now updated the pictures and description.

Context
The plot in brief: What is the film about?

Cuties is a French-language film directed by Maïmouna Doucouré and has hit the French theaters on August 19. This film, which bagged the World Cinema Dramatic Directing award at the Sundance Film Festival in January, portrays the struggles of a Senegalese immigrant girl named Amy, who is frustrated of her conservative parents and takes interest in a contemporary girl dance group named Cuties.