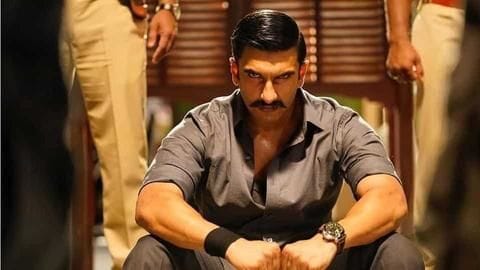 For more than a month now, Ranveer Singh has been garnering media attention. After his much-talked-about wedding with Deepika Padukone, the actor is now creating a buzz with the trailer of Simmba. The movie features Ranveer as a rogue cop who is inspired by Ajay Devgn's Bajirao Singham. Helmed by Rohit Shetty, the trailer has certainly raised our expectations. It has blockbuster written all over it.

The cop
Ranveer impresses as Sangram Bhalerao aka Simmba

We all know that Ranveer is a top-notch actor who hates being stereotyped. In Simmba, director Rohit Shetty has brought him in a never-seen-before avatar. Ranveer is playing a corrupt police officer Sangram Bhalerao aka Simmba who is 'senti' and mental too. Simmba is a new-age mass hero who is like a 'dream turned into a nightmare' for the villains.

Impressive Ranveer
He is no saint and is unapologetic about it

Baba has often impressed us with his lively appearances on screen. But this time it will be different as the Gunda will be seen beating the goons with a swag. The whistle worthy dialogues tell us no one but Ranveer could have played Simmba. Moreover, Ranveer's transition from being a rogue cop to an honest person also looks promising, despite being predictable.

Sara
We also get glimpses of Sara, but Ranveer shines throughout

Simmba also features Sara Ali Khan in the lead role. This will be Sara's second release after her Bollywood debut with Kedarnath, which releases this week. While Sara looked promising in Kedarnath trailer, she didn't quite leave an impression in Simmba, probably because her role isn't meaty. We sincerely hope the movie is different, as we have high hopes from this debutante.

Director-actor
Rohit and Ranveer: A match made in Bollywood heaven

Like other Rohit Shetty movies, Simmba's trailer has dropped hints about the movie's crux- a corrupt police office mends his way after an emotional tragedy. Yes, we have seen this a zillion times. However, you can bet that Rohit's magic will make the story larger than life. It's worth mentioning he has found his 'soul mate' in Ranveer.

Apart from Ranveer-Sara, Simmba also has Sonu Sood as the antagonist. We have seen him playing the bad guy in Dabangg (Cheddi Singh) and R...Rajkumar (Shivraj Gurjar). And have you noticed, he does make for a super-hot villain? But the trailer failed to highlight any new side of Sonu. We wonder if his character will have more layers in the movie.

Simmba is the remake of Telugu movie Temper. However, it also has a connection with Ajay Devgn-starrer Singham. In the trailer, we see Ajay introducing Simmba to the audience, and narrating his background story. But his role doesn't end there. The actor will also be seen in a cameo and will make a grand entry in his 'true-blue' Singham style.