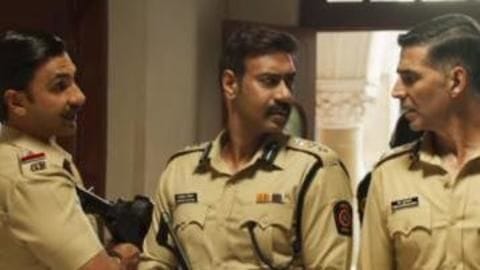 Rohit Shetty's blockbuster police universe is all set to hit theaters once again. The much-awaited official trailer of the director's fourth installment in his cop movie series Sooryavanshi is now out. While the new movie focuses on Akshay Kumar as anti-terrorism squad officer Veer Sooryavanshi, it also features cameos from 'Singham' Ajay Devgn and 'Simmba' Ranveer Singh. Read on to know more about this.

The trailer, over four minutes long, opens with shots of Mumbai's iconic Gateway and gives us a sneak peek into the city's turbulent past with terrorism — showcasing real shots from the notorious 1993 and 2008 terror attacks. Thereafter, Akshay makes a heroic entry as DCP Sooryavanshi, a dedicated officer of Mumbai Police's ATS. The movie also stars Katrina Kaif as Sooryavanshi's wife.

Sooryavanshi and his team are out on a mission to fight a major terror attack threat looming over the city. The attack is orchestrated by a radical group, spearheaded by a character played by Jackie Shroff. But Sooryavanshi can't do this all alone. And then Rohit's famed cop characters like DCP Bajirao Singham (Ajay) and notorious Sangram Bhalerao alias Simmba (Ranveer) enter the scene.

Details
Cars, copters, explosions and stunts, the trailer has it all

Staying true to his style and history of filmmaking, Rohit has infused Sooryavanshi with countless action-packed sequences, that feature not just bike and car chases but also copters flying above the ground, many explosions, some seemingly unreal stunts, and a few pinches of drama. Further, the trailer also gives glimpses of Gulshan Grover and Kumud Mishra.

Co-produced by Rohit and Karan Johar, Sooryavanshi is the fourth part in Rohit's cop universe, after Singham (2011), Singham Returns (2014) and Simmba (2018). The movie is set to release on March 24, and will run in Mumbai theaters 24x7, courtesy a new government policy.