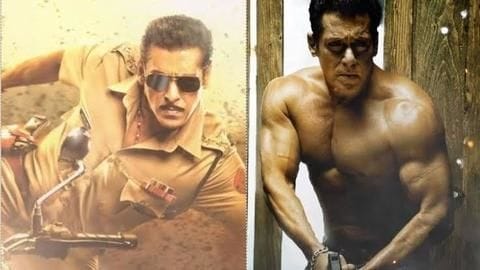 Bollywood superstar Salman Khan had a special weekend treat in store for his fans, as he not only shared a fresh motion poster for his upcoming movie Dabangg 3, but also announced his next big release, Radhe: Your Most Wanted Bhai. The first look of the film shows the 53-year-old actor sporting an intense expression, a chiselled body and a gun in hand.

The first look introduces 'Radhe' as "half good, fully mad"

Produced under the banner of Salman Khan Films, Radhe: Your Most Wanted Bhai promises to be an action-packed thriller. The film, directed by choreographer and filmmaker Prabhu Deva, will release on the occasion of Eid 2020. Notably, it would mark the third collaboration between Salman and Prabhu Deva, after Wanted (2009) and the awaited release Dabangg 3. Reportedly, the film also features Disha Patani.

It has to be a completely different character: Director

In an earlier interview with IANS, director Prabhu Deva had said about the film, "It has to be a completely different character. Otherwise, the audience will say we are repeating. We are working on it. The target is Eid and we'll make it on time."

Earlier, Salman was set to star in now-shelved film 'Inshallah'

Earlier, Salman was set to star in ace filmmaker Sanjay Leela Bhansali's planned project, tentatively titled Inshallah, opposite Alia Bhatt. However, the Bajrangi Bhaijaan actor walked out of the flick, citing "creative differences" with the director. Naturally, the fans were left disappointed, as the film would have been a collaboration between the actor-director duo post two decades, after 1999's Hum Dil De Chuke Sanam.

Salman's 'Dabangg 3' to release on December 20