How Uri's popular 'How's the Josh' line came to life 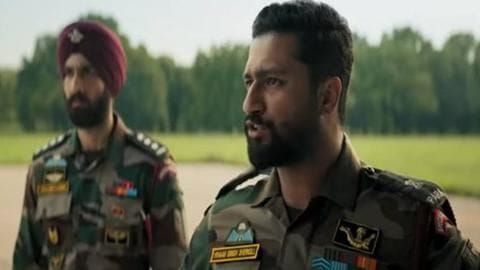 Vicky Kaushal's Uri: The Surgical Strike is unstoppable. The movie, which is based on the Indian Army's surgical strike in 2016, continues to win hearts. Apart from the storyline, it was Vicky's catchphrase 'How's the josh?,' which also got appreciated. But did you know this dialogue was inspired by the childhood memory of the film's director Aditya Dhar? Read more.

Information
2016 surgical strike: Incident that served as idea of film

Following the terror attack by the Pakistani terrorists on security forces in Uri, Jammu and Kashmir, the Indian Army in 2016 conducted a surgical strike against the military launch pads in Pakistan. The Uri attack claimed the lives of 17 army personnel.

Memories
I used to visit a lot of Army clubs: Aditya

Recalling the story behind the catch-phrase, Aditya said, "I had some friends from Defense background. I used to go with them to a lot of Army clubs. There was one in Delhi where we used to go for Christmas or New Year parties." He said a retired Brigadier there used to line up all the kids in front of him to give chocolates.

Origin
Retired Brigadier is the real inspiration behind the dialogue

The Brigadier would say 'How's the josh?' and we were to respond with 'high sir!' The kid who was the loudest got the chocolate, said the director, remembering fondly. Aditya said that being a foodie, he used to be the loudest and therefore, always got the chocolate. The phrase has acquired a life of its own, something that the director had never anticipated.

Quote
'Used the line in a right way in the film'

"I have heard very few Army people use the phrase. It's not something which is used extensively. What I did was I used the line in the right way in the film and now it has taken off to another level," said the director.

Comment
Aditya knew he had to include the line in 'Uri'

When Aditya sat down to pen Uri: The Surgical Strike, he knew he had to include the line. "The line was there right from the first draft. As a writer, we write according to our personal experiences, our memories. I had the line with me in my memory and this was the perfect film for it to come out," he said.

The film, which released on January 11, has emerged as a huge blockbuster, and is still running to packed houses. It's all set to enter the Rs. 200cr club. Other than Vicky, the film stars Mohit Raina, Kirti Kulhari, Yami Gautam, Paresh Rawal, Manasi Parekh, Rajit Kapur, Shishir Sharma, and Swaroop Sampat. The global box-office collections of the film are nearing Rs. 300 crore.

Information
Response for the film has been 'magical and beautiful': Aditya

For the first-time filmmaker, Aditya says the response for the film has been "magical, beautiful" and the magnitude of love coming the film's way was something the team never anticipated. The film's journey-and it's eventual success-is stuff of legends for Aditya.

The director was working on Raat Baaki, which was supposed to feature Pakistani actor Fawad Khan and Katrina Kaif in the lead but Khan had to exit the project after Pakistani artists were banned from working in India in the aftermath of the Uri attacks. Aditya turned the situation on its head and made a different film revolving around the attack.

Lessons
'In this industry, just change the situation in your favor'

Aditya said Uri hasn't only been a box office success but also taught him to use unpredictable nature of the business in his favor. "I learned in this industry that whatever the adversity, you have to just push yourself and change the situation in your favor. When the surgical strikes happened, Pakistani artists were banned," he said, adding everyone was sad for the film.

Quote
'Only way to survive in this industry, keep josh high'

"I wanted to know what happened during the attacks because that sounded like a great story. That switch happened very fast. It's the only way to survive in this industry. You have to be mentally strong, you've to always keep the josh high," said Aditya.