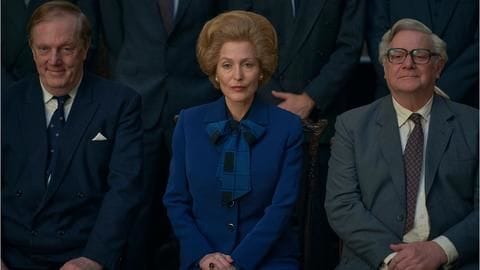 The latest trailer of Netflix's British kingdom drama The Crown Season 4 has just upped the hype around the show. The clip, lasting over 2 minutes, shows the fearsome battle and tension between former UK Prime Minister Margaret Thatcher and Queen Elizabeth. If any Netflix title has given people food for political thought in this pandemic, it's The Crown and its engaging trailers.

To say the least, the trailer is explosive on many viewpoints. Producers of the series never cease to tease its audience with profiles of Lady Diana Spencer on-screen, played by 24-year-old actress Emma Corrin. The latest trailer takes off from where the previous one leaves the audience, gasping for the full profile of Diana. But there is a bigger question demanding to be asked.

Thatcher, played by Gillian Anderson, starts asking a list of fearless questions with her magnanimous presence before Olivia Colman aka Queen Elizabeth. Kneeling before the Queen, Thatcher is seen starting her dialogue with respect and empathy from one woman to another. She tactfully mentions the 6-month age gap between the two, and when the Queen asks who is senior, Thatcher says, "I am, Ma'am."

Great trailer
The narrative moves on to Prince Charles-Diana's paradise

That scene in the trailer would move even someone who hasn't watched the series. The ideological battle starts thereafter, in which Thatcher pitches her efforts to turn England into a "self-reliant country," to which Queen Elizabeth sends across a veiled threat of animosity against Thatcher as civil protests continue. The narrative then hops onto the trouble brewing up in Prince Charles and Diana's paradise.

Comment
"I think there was probably a lot of respect"

"It could be said that they are two very similar women, born only months apart. They are very much defined by the Second World War, by a sense of frugality, hard work, commitment, Christianity. It was a commonly held piece of wisdom that the Queen and Thatcher didn't get on." "I think there was probably a lot of respect," said executive producer Peter Morgan.