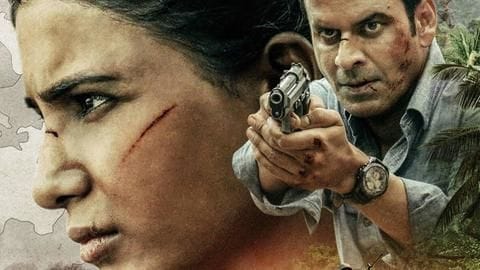 And the wait is over for The Family Man 2 fans! The second installment of the Raj and DK show is coming to Amazon Prime Video next month. Makers announced that Season 2 will premiere on June 4, while dropping its trailer today. From the clip, we realized that this edition of the sassy series will take the thrill quotient a notch higher.

Trailer
Srikant must put in more hours as the family man

The trailer opens with Srikant (Manoj Bajpayee) and his wife (Priyamani) sitting at the office of a counsellor, most likely to save their failing marriage. We get to know Srikant has switched jobs, and his new boss asks him to do more than the bare minimum. At the same time, it's shown that his special security force members are involved in "exciting" cases elsewhere.

New antagonist
Samantha Akkineni's Raji is menacing, vows to 'kill them all'

Soon we get a glimpse of the new terror in town, Raji (Samantha Akkineni), who swears to "kill them all." The Telugu superstar impresses with her void-like facial expressions and menacing action. Also, this time the story incorporates a lot of fun elements and unfolds in Chennai. Notably, Sharad Kelkar, Shreya Dhanwanthary, and Sharib Hashmi will be reprising their roles from the previous season.

With Raji, a a Sri Lankan Tamilian character, Akkineni will be debuting in the OTT format. While announcing the trailer release date, Bajpayee had also shared the poster of the second season earlier. A bruised Srikant had covered a handsome part of the poster, while Raji loomed large over the entire thing; as if it's a premonition to her effect in the upcoming series.

To recall, Bajpayee had confirmed that the new season will be coming in the "peak of summer." His words indeed have come true, delighting ardent fans of the show, who have been eagerly waiting to know what actually happened after the end of Season 1. Tracing back, that season had ended on a cliffhanger, with Delhi about to go up in flames.