Dear 'Pihu' makers, your promotional-strategy of calling people is pathetic

Last evening, I got a call from an unknown number. Staying true to my habit of not receiving calls that don't flash a name, I disconnected it. I got a call again and answered it only to hear a wailing baby's voice. A few seconds later, the baby introduced herself as Pihu, and I joined the dots with the upcoming movie. But many can't. Which is why this route of promoting the movie is dystopian.

The movie
Not being shocked by the movie's premise is impossible 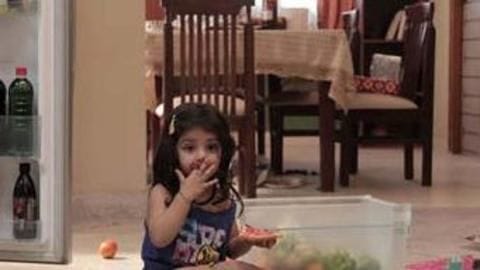 The trailer of 'Pihu' released recently and it has got everyone talking. The Vinod Kapri directorial is the story of a 2-year-old named Pihu stuck in a flat alone, with her dead mother. Co-produced by Ronnie Screwvala and Siddharth Roy Kapur, the movie is based on a true story. The performance of Pihu Myra Vishwakarma looks splendid, but the trailer is unsettling.

In just two minutes the trailer shows how Pihu acts alone in the house, burns the stove, sets off the geyser, locks herself in the fridge, hugs her dead mother, and almost jumps from the high rise building. If you haven't seen the trailer, congratulations, you have saved yourself minutes of trauma. If you have, you know how disturbing it is.

Notably, the movie, which releases on November 16, opened the International Film Festival of India, Goa, in 2017. At the 14th Trans-Saharan International Film Festival at Zagora in Morocco, it won two awards. All its prestigious feats hint the movie would be extraordinary. It would be a commentary on parenting, emergency situations, and would focus on turns of time. All of this I understand, the eerie phone calls I don't.

The movie might turn out to be nothing like we (if we gain enough courage to watch it) have seen before. And kudos to the brains behind it. But the marketing team forgot to tow the line. Since coming up with a unique idea was difficult, they came up with a creepy one. No one, I repeat, no one wants to hear cries of a baby only to get worried and then be informed it's all for promotions.

I loved the trailer of Pihu, but like calling people up from an unknown number as a part of a movie promotional strategy is fucking annoying. Especially when the phone call is of a baby crying for her parents. Movie marketing has reached absurd levels.

And here's the icing. My number's registered with the #Donotcall registry. But clearly, such things don't matter in our country. It takes special insensitivity to make unsolicited calls and play recordings of traumatised children -- so you can promote a film. Pathetic.

Opinion
Bring back the era of Instagram videos for promotions, please!

In recent years, we have seen film promotions go overboard, Bollywood celebs have posed with sanitary napkins ('PadMan'), have needled a thread ('Sui Dhaga'), have done a hook step ('Prem Ratan Dhan Payo'), etc. We have been spammed by their videos but that was way better than this. Some of us are actually empathetic and care about issues. But guess the makers just forgot we exist!