Netflix's 'Geeked Week' Day-2: 'Money Heist,' 'The Sandman' and others 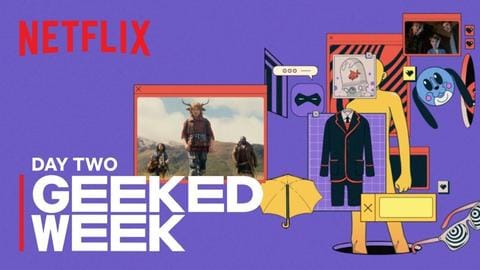 Yesterday, we got a sneak peek at Netflix's Geeked Week, a virtual event where fans were treated with new teasers, announcements, and cast interviews from their favorite shows, movies, and anime. After a successful day one, Netflix viewers eagerly looked forward to day two, which promised even more exciting titles. Today's event included The Umbrella Academy, Cowboy Bebop, The Sandman, and many other shows.

The Umbrella Academy creator Steve Blackman confirmed that season three is currently in production. He also revealed the ten-episode titles, and some of them sound ominous. In ascending order, the episode titles are Meet the family, World's Biggest Ball of Twine, Pocket Full of Lightning, Kugelblitz, Kindest Cut, Marigold, Auf Wiedersehen, Wedding at the End of the World, Six Bells, and the finale Oblivion.

After sharing an incredible trailer, fans were treated with new images from the upcoming Money Heist season five. The photos showed Rio, Spanish guards, and our beloved gang with guns and bazookas, ready to wreak havoc. Meanwhile, Locke and Key cast members confirmed season two is premiering this October. We also got a new look at the Locke family, as they unravel more mysteries.

What secrets will the keys unlocke next? Here's your first look at Locke Key season 2, coming in October! #GeekedWeek pic.twitter.com/CliEjIl42H

Katee Sackhoff is coming back for Another Life season two, confirmed to release this fall. An intense new trailer was also unveiled during the event. Meanwhile, Sweet Tooth, an apocalyptic series, is currently streaming on Netflix. It's produced by none other than Robert Downey Jr. The story is about a half-boy and half-deer, who is looking for a safe haven with his gruff protector.

They can't fight, and they sure as hell can't run.

Anime fans were in for a treat when they got to know Yoko Kanno, the composer behind the iconic soundtrack of the original Cowboy Bebop, is returning. The series is officially coming this fall, and stars John Cho, Mustafa Shakir, and Daniella Pineda.

The Sandman creator Neil Gaiman gave us behind-the-scenes footage of the upcoming series based on his book. Gaiman heaped praises on the production team, and said, "This is Sandman made for people who love Sandman, made by people who love Sandman." The cast details were also revealed, which includes Game of Thrones actor Gwendoline Christie, Tom Sturridge, Charles Dance, Stephen Fry, and many more.

Go behind the scenes with @Neilhimself for a sneek peek at the production of The Sandman. #GeekedWeek pic.twitter.com/n3EQebWz5C