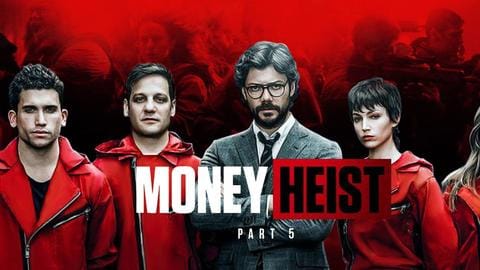 After a long wait, we finally have the official teaser of Money Heist Season 5, and it's a bittersweet feeling. The fifth and final season of the Netflix heist drama promises to be a wild ride. The teaser comes packed with a lot of action, and this time with more ammo. It brings back our favorite gang, firing guns and fighting for their lives.

The teaser packs quite a punch, capturing the pain that our beloved red jumpsuit-clad crew is going through. Shot entirely in slow motion with 2WEI's In The End cover in the background, it hints that this season will be beyond just heist. We see the cops shooting right at them in the bank, while the gang continues to resist and just wouldn't give up.

Reaction
No Nairobi or Berlin this time, fans express sadness

After the teaser dropped, fans expressed their sorrow, as Nairobi and Berlin won't be around this time. Many also noticed a blink-and-miss shot of hands tied to a chair. Fans think Alicia Sierra has somehow overpowered the Professor, and taken him hostage. "This is more than a heist. This is war," reads the caption, hinting that it is really the end of the road.

Details
Cast, release date, and other details of Season 5

The upcoming Season 5 stars the usual suspects Álvaro Morte, Úrsula Corberó, Pedro Alonso, Itziar Ituño, Najwa Nimri, Jaime Lorente, Miguel Herrán, and others. Interestingly, the series will release in two volumes of five episodes each. The first volume will premiere on September 3, while the second on December 3. Netflix also recently shared a photo of the cast coming together one last time.

Statement
'We had to change what was expected,' showrunner issues statement

Money Heist series creator Álex Pina revealed what fans could expect from the upcoming season. "When we began to write Part 5 in the mid of the pandemic, we felt that we had to change what was expected from the ten-episode season and used every tool we could to create the sensation of a season finale or series finale in the first volume itself."

Quote
"It's a journey across their sentimental map"

"We decided to work in an extremely aggressive genre, putting The Gang on the ropes. In volume 2, we focus more on the emotional situation of the characters. It is a journey across their sentimental map that connects us directly to their departure," he concluded.