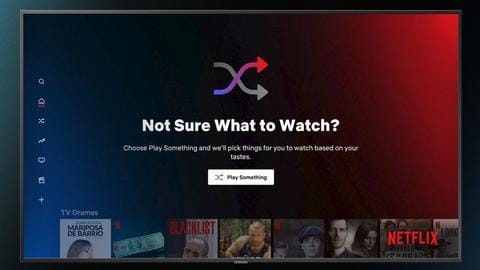 In January, Netflix was spotted testing a feature called "Shuffle Play" on its app for smart TVs. At the time, it was speculated that the feature would witness an official roll-out later this year. Turns out Netflix finally pulled the trigger, launching the feature now rebadged as "Play Something". The feature is available on smart TVs and will reportedly come to Android devices soon.

What does it do?
'Play Something' would recommend content based on what you've watched

Play Something works just like the Shuffle button on music players. It aims to save your time spent browsing through Netflix's extensive content library in search of the next movie or show to binge on. Netflix said that Play Something will instantly start playing content that the platform thinks you would love. It finds such content based on what you have watched before.

Such content could be something you stopped watching midway or something you perhaps wanted to watch. Netflix said that a "Play Something Else" option would also be available in case you don't like the first series or movie that Netflix jumped to. In its announcement, Netflix further said that the feature could be the remedy for indecision when you can't decide what to watch.

Play Something can be accessed on the smart TV app in multiple ways. A button has been added underneath the user profile name, right where the Shuffle Play button used to be when Netflix was testing this feature earlier. It can also be found in the tenth row on the Netflix homepage and in the navigation menu on the left of the screen.

The Play Something feature fully supports text-to-speech, for the few who use screen readers. This can be enabled via the app's accessibility settings. Although Netflix has only made the new feature available on the app for smart TVs for now, Variety reported that the feature could come to the Android app soon. Meanwhile, there is no news about the iOS release yet.