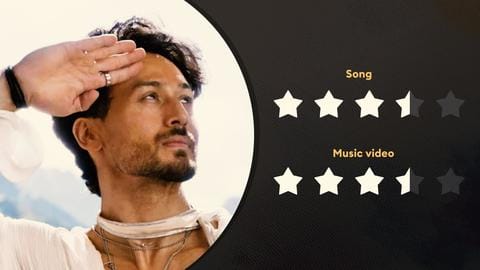 Bollywood actor Tiger Shroff, who is known for his action and dance moves, left all surprised with his soulful voice. A music video, titled Vande Mataram, was released today and its song has been crooned by the Heropanti actor. This patriotic track is his first singing experience for a MV, in which Shroff has shown his dancing talents as well. Here's our review.

The video has been created with a balanced combination of old footage and new ones. Paying tribute to the Indian Defense Forces, this clip displays old videos of the Airforce, the Navy, the Independence day parade and PM Narendra Modi saluting Amar Jawan Jyoti. In between these, it features Shroff singing, showing his dance moves, along with stunts in front of the National Flag.

Song
Shroff's voice and the lyrics blended perfectly for this video

The War actor has given his all to try and bring in patriotic feelings with this song. From starting on a lower key and taking it to a high note, Shroff's voice sounded professional. Plus, Kaushal Kishore's beautiful lyrics add life to the vocals. The music, composed by Vishal Mishra, is impressive, especially during the chorus.

Netizens felt extremely happy after listening to Shroff's song. While some couldn't believe their ears, a few called it the "best patriotic song." Apart from his fans, renowned singer Asha Bhosle, in a video on social media, also praised the actor's voice. She said, "I heard Shroff's Vande Mataram and he has sung beautifully, without losing the rhythm or missing any key." Wow!

Verdict
It's a perfect song for Independence Day, gets 3.5 stars

Presented by Jackky Bhagnani and Jjust Music, the music video has Remo D'Souza in the director's seat. The only drawback is at 3.53-minute-long, the clip felt quite dragged out, and thus, the track loses its pace in between. Overall, it is enjoyable and a perfect patriotic number for the coming Independence Day celebration. Verdict: 3.5 stars each for song and MV.