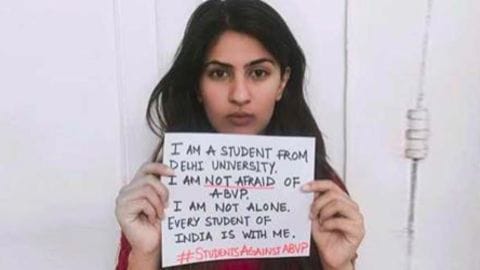 Gurmehar Kaur, who shot to fame after taking on the ABVP during the Ramjas violence, has been named by Time among its top-10 Next Generation leaders. After her protest, Gurmehar was trolled and allegedly threatened with rape. The LSR student had to leave Delhi temporarily. "But still she refuses to be silenced, and has a memoir due to be published next year," Time writes.

After the Ramjas protests, Gurmehar launched a #StudentsAgainstABVP campaign and posted photos holding placards that said: "I am a student from Delhi University. I am not afraid of ABVP. I am not alone." The viral campaign led some people digging her previous video in which she had condemned the concept of war. That video invited criticism from well-known names including Virender Sehwag, Yogeshwar Dutt and Randeep Hooda.

Gurmehar's father Captain Mandeep Singh, an army officer, was killed in the Kargil war when she was two. Before her #StudentsAgainstABVP campaign, she had shared a video saying "Pakistan didn't kill my father, war did". The video went viral after her Ramjas stint.

"Kaur was a target for online trolls and thrust to the centre of a national debate on free speech and dissent in an increasingly nationalistic India," Time notes. Gurmehar responds: "While I never asked for it, I was pushed to the forefront. I realized that people listen to what I say. And if I have something positive to say, why shouldn't I say it?"