Home / News / India News / Hindu society will progress only if it comes together: Bhagwat
India

Hindu society will progress only if it comes together: Bhagwat

Hindu society will progress only if it comes together: Bhagwat
Written by Zainab Ahmed
Sep 08, 2018, 11:47 am 2 min read 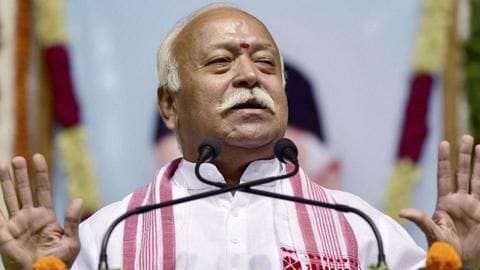 On Friday, Rashtriya Swayamsevak Sangh (RSS) chief Mohan Bhagwat called for the Hindu society to be united. Addressing the second World Hindu Congress in Chicago, Bhagwat emphasized on the collaboration of the Hindus and said it is the need of the hour. The conference marks the 125th anniversary of Swami Vivekananda's speech at the Parliament of World Religions in 1893. Here's what he said.

Bhagwat said the Hindu society had meritorious people all across the world in every field, but they don't work together as a community. "Coming together of Hindus in itself is a difficult thing," Bhagwat said and added that Hindus had been suffering for thousands of years because they have forgotten to practice their basic principles and spiritualism.

Details
On Hindu society and values

"Our values are universal values, presently called by the world as Hindu values. It is the duty of the Hindu nation and society to provide this as a framework for the world," said Bhagwat. He added that his organization was a "postmodern" outfit with a "futuristic" outlook. "We are postmodern. What humanity will need 20 years later, we are thinking today," he quipped.

Touching politics briefly, Bhagwat said that politics must be fought like politics, but without changing oneself. He subtly drew parallels in the relationship between Krishna and Yudhishtir in the Mahabharata without naming anyone. Bhagwat ended the speech by comparing Hindu society's status to the moment in Mahabharata when the fortunes of the exiled Pandavas suddenly turned around.

Information
The other speakers

Illinois Lieutenant Governor Evelyn Sanguinetti, Ashwin Adhin, Vice President of Suriname, Raju Reddy, Vice-Chair of the WHC, and SP Kothari, Chairperson, organizing committee of the WHC were the other speakers on Day 1. Around 2,500 delegates from 60 countries attended the event.