Home / News / India News / This tea-seller from Kerala is winning the Internet!
India

This tea-seller from Kerala is winning the Internet! 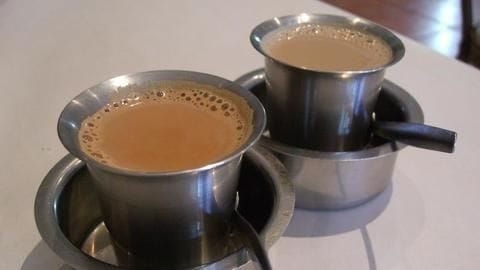 In the past few days, floods have ruthlessly created havoc in Kerala. But in such trying times what stood out is people's resilience. Take for example this tea-seller, who's running his stall standing in flood waters. And the way he is operating is simply mind-blowing. No wonder the video showing him running his business is now viral!

Process
Places glasses on plastic tray and gives it a nudge

The video that has been shared on Twitter by one Parul Mathur, an IT professional, shows the man, standing in knee-deep water, making tea and pouring it in glasses. He then places it on a plastic tray and gives it a slight nudge. It then goes towards the customers, who pull the tray towards them and picks up the glasses and bread.

Some customers are seated on a raised wooden plank, and some are standing, but all have their legs submerged in water. Ignoring the difficulty and wearing smiles on their faces, they proudly exclaim in Malayalam, "You won't get this set-up anywhere else in the world." This set-up is popularly known as Kareem's shop that is situated in Vettukadavu under Thrissur district.

Information
Hats off to human spirit!

The video has garnered quite an attention with people commenting on the sheer resilience and attitude shown by this tea-seller and the customers. Though the veracity of the video couldn't be confirmed, but the message given out is quite clear: human spirit is indomitable!