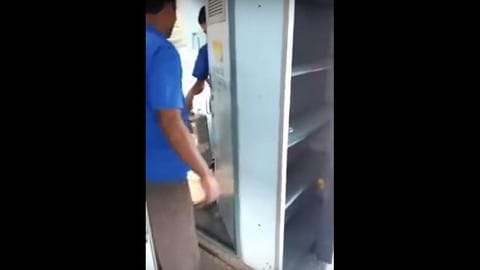 In a major embarrassment for the Railways, vendors aboard the Chennai Central-Hyderabad Charminar Express were caught on camera purportedly mixing water from a toilet in the tea served to passengers. This comes nearly a year after a CAG report said food served on trains is unfit for consumption. The South Central Railway (SCR) has now levied a fine of Rs. 1L on the contractor.

In the video reportedly captured aboard the train at Secunderabad railway station (Hyderabad) in December'17, a vendor is seen waiting outside the locked door of a train toilet. Soon after, another opens the door from inside and hands him two tea cans before coming out holding a third can. When passengers at the spot question him, they are seen evading them.

In a statement, SCR PRO M Umashankar said that an inquiry was conducted in the matter and "on the basis of it, stringent action has been taken up against the Train Side Vending contractor for the section between Secunderabad and Kazipet, P Sivaprasad." Apart from the Rs. 1L fine, two unauthorized hawkers seen in the video have also been removed.

Last July, a CAG report revealed alarming facts: contaminated and recycled food, unpurified water direct from taps and other edibles unfit for consumption is being served on trains and stations. Rats and cockroaches were found in many of the 80 trains and 74 stations audited. It blamed frequent changes in catering policy and inability of the Railways to provide proper infrastructure for the situation.