Monsoon-preps: BMC's 'superior' pothole-filling mix to be ready by mid-June

Mumbai's monsoon has become synonymous with its infamous potholes. Not taking risks this time, BMC will start manufacturing its 'superior' patented pothole-filling mix from this month. However, instead of the usual 11,000 metric tonnes used every year, BMC's Worli plant would churn out only 2,500 metric tonnes of the mix by mid-June, which will then be put to test on a pilot basis. 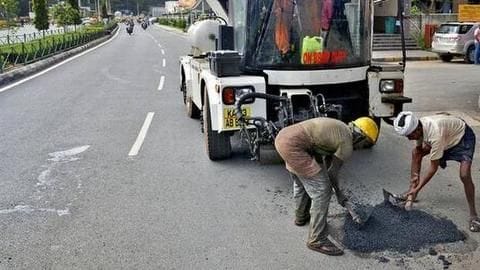 Last year, Mumbai's civic body spent a whopping Rs. 70L for importing just 38 tonnes of this mix from Austria and Israel, and it apparently yielded results. BMC then decided to use raw materials to make this mixture itself starting this year, after buying ingredients from a German firm. This way, instead of Rs. 170/kg, BMC would pay just Rs. 28/kg.

Requirements
For 11,000 metric tonnes, Worli plant needs to be upgraded

The Worli plant has two machines, set up in 1992 and 2010, which have a combined capacity of churning out 160 tonnes of mixture hourly. If the self-manufactured mix comes out well, BMC would need 11,000 metric tonnes for the monsoon season. For that, the contractor M/s Infrasource Equipments and Materials has been asked to make some changes to the plant and install add-ons.

Activist asks
'Will contractors do the essential water evaporation before applying mixture?'

Mumbai potholes always make a comeback at the same place because the mixture peels off during monsoons. BMC assures change this time as the new mixture has bitumen, known for its adhesive qualities, as main bonding-agent. However, activist James John said bitumen loses its effectiveness when it interacts with water, so before applying the mixture, water should be evaporated, which is almost never done.