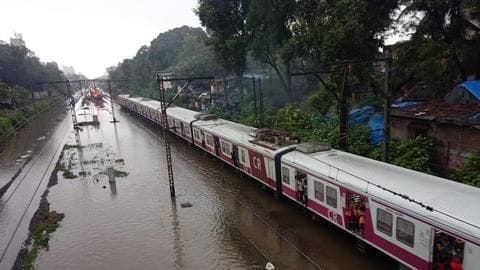 Mumbai continues to reel under torrential rainfall, affecting local train services and causing heavy traffic gridlocks. Several areas like Andheri, Khar, Malad and Chembur witnessed waterlogging and people could be seen wading through the streets. Wall-collapse incidents were reported from Thane and South Mumbai, burying several cars and two-wheelers under debris. Till 9AM, the city received above 200 mm of rainfall in last 24hrs.

Around 5AM today, the compound wall of Lloyds Estate in South Mumbai's posh Antop Hill in Wadala collapsed, damaging fifteen cars. The road in front of the wall has also caved in, leaving residents stranded. The entire C and D Wings of the high-rise were evacuated. Fire-brigade and BMC officials have reached the spot and rescue operations are on.

Local train services were also running late forcing many people to work from home. A Twitter-user clicked water gushing out of Thane station. Heavy rains coupled with track failure near Bandra station and low visibility has affected even mail express trains. Tracks at Sion, Thane stations on Central Railway line are under water, causing 7mins delay of trains on Mainline, Harbour and Trans-harbour.

A container has broken down on the JVLR bridge, Vikhroli, northbound near Eastern Express highway, resulting in slow traffic movement, Mumbai Police tweeted. Due to waterlogging, traffic has been closed at Khar subway, Santacruz division and diverted to Link Road. Traffic is also moving slowly on Santa Cruz-Chembur Link Road that connects the Western Express Highway with the Eastern Express Highway.

Since yesterday, three people have died in Mumbai and Thane due to wall-collapse and tree-felling brought over by the downpour. Yesterday evening, a tree fell near Metro Cinema in south Mumbai, killing two persons. In Ambernath taluka of Thane, a building wall collapsed, killing a 13-year-old boy and injuring his parents. Another 65-feet compound wall of a housing-complex in Thane caved in today morning.

Prediction
Brace for more rain: To continue for next 48 hours

The MeT department has predicted heavy-to-very-heavy rain for next 48hrs. Skymet Weather, a private forecasting agency, also said heavy rains will continue for the next 12hrs. "These heavy showers are due to a cyclonic circulation over north Konkan and adjoining south Gujarat and another circulation in Bay of Bengal," said an IMD official. The rainfall has gained intensity since yesterday evening, he added.