The year 2018 was a memorable year for the people in the Maldives. Then-President Abdulla Yameen was defeated in what most expected to be a rigged election. The protagonist was Ibrahim Mohamed Solih, a calm and composed man who has been at the forefront of democratic reforms in the country. Born on March 1, 1962, in Hinnavaru Maldives, Solih moved to Male at a young age. A close friend of former President Mohamed Nasheed, Solih married his first cousin Fazna. He began his career as a lawmaker in 1994 when he won from Lhaviyani Atoll. Victory against a ruling party candidate at a time when the country did not have an opposition brought him to national prominence. Solih was one of the founding members of the Maldivian Democratic Party (MDP) and was one of the vociferous advocates of multi-party democracy in the Maldives. When Nasheed was ousted from the presidency after a coup in 2011, Solih was elected as the leader of MDP’s parliamentary group. He was one of the few senior leaders of opposition parties who escaped the wrath of Abdulla Yameen. In the 2018 Presidential election, he caused a major upset when he defeated Yameen. 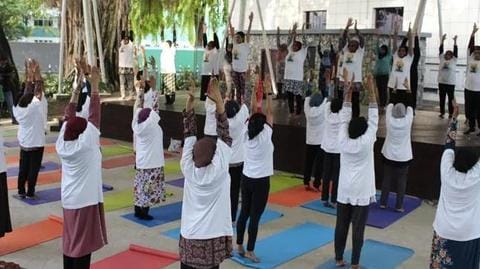 The Maldivian government has ordered an investigation after an angry mob disrupted an International Yoga Day event organized by Indian Cultural Centre at a stadium in the capital Male and threatened the attendees.