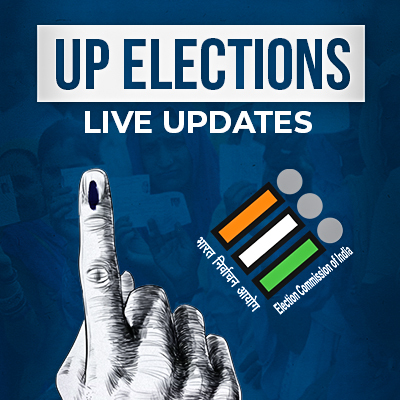 The BJP is planning to offer government jobs, employment, or self-employment opportunities to at least one person in every family in UP, CM Adityanath said at a rally in Chauri Chaura, Gorakhpur.

Separately, PM Modi told a Varanasi rally that the dynasts (referring to the SP) installed obstacles in UP’s development when they were in power.

“In the last five years, the double-engine BJP government has sincerely tried to further development,” he added.

PM Modi greeted the crowd at a public rally in Varanasi, his parliamentary constituency.

Separately, at a rally in Azamgarh, Defence Minister Rajnath Singh said politics should be based on humanity and justice.

“It's unfortunate that even after 75 years of independence, politics based on caste, creed, and religion is being done,” he said.

As of 3 pm, a voter turnout of 46.28% was recorded in Sunday’s polling, according to the Election Commission.

The highest voter turnout was recorded in Chitrakoot at 51.56%.

Addressing a rally in UP's Deoria, PM Modi said the 2022 state elections are between rashtrawadis (nationalists) and parivarwadis (dynasts).

“Remember how you had to take your vehicles to Gorakhpur in medical emergencies because the then-government did not pay heed to people's medical needs here,” Modi said. “Many innocent kids died due to brain fever.”

UP CM Yogi Adityanath is the BJP candidate from the Gorakhpur Urban seat, which will go to poll on March 3.

Addressing the Basti rally, PM Modi said the BJP government is bringing back thousands of Indians home from Ukraine, where Russia has launched an invasion.

“The government of India is working day and night for them,” he said.

Separately, he said his government is setting up a network of ethanol plants in UP.

“We don't have oil refineries, we import crude oil. They (the Opposition) never paid attention to it,” he said.

PM Modi targeted the rival Indian National Congress and SP, referring to them as “parivarwadi” or dynasts.

The dynasts made India’s army dependent on other countries and destroyed the defense sector, he said. The Congress party had been in power at the Centre before Modi's BJP.

“Today, we have a defense corridor being set up in Uttar Pradesh,” he added.

The BJP government ensured that no one is deprived of COVID-19 vaccines, Uttar Pradesh Chief Minister Yogi Adityanath said at a rally in Gorakhpur on Sunday.

Had the Akhilesh Yadav-led Samajwadi Party been in power, the poor would not have received them, he said.

He further said that an SP leader told him that the former Yadav government’s priority was to get a “kabristan (cemetery) boundary made” and not infrastructural development.

A voter turnout of 21.39% was recorded till 11 am during Sunday’s polling, according to the Election Commission.

Voting had commenced at 7 am and will last until 6 pm in the evening.

The results will be announced on March 10 after the sixth and seventh phases of polling on March 3 and 7, respectively.

Casting his vote at a polling booth in Barabanki, Congress leader PL Punia said the ruling Bharatiya Janata Party (BJP) knows it is weakened and losing.

Voters will not get lured as they have decided to make the BJP lose, he added.

Earlier, Congress leader Pramod Tiwari had blamed the BJP for “mafiawad” in UP.

“In 1996 when BJP-SP formed the government, 21 ministers were mafias, had a criminal background,” Tiwari said.

A voter turnout of 8.02% was recorded till 9 am in the fifth phase of polling on Sunday, according to the Election Commission.

In the fifth phase of elections, 61 assembly seats are going to poll across 12 districts.

Over two crore voters will decide the fate of 693 candidates who are in the fray.