Congress leader Rahul Gandhi today slammed Twitter for locking his account on the social media platform. He accused the company of being biased and interfering in the political processes of the country. The Twitter profiles of Gandhi and several other Congress leaders have been locked in recent days, inviting criticism from them as well as other Opposition leaders.

'Our democracy is under attack' 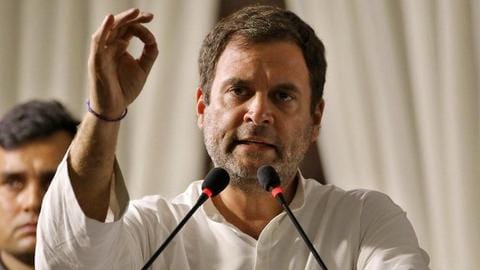 "Our democracy is under attack. We are not allowed to speak in Parliament. The media is controlled. And I thought there was a ray of light where we could put what we thought on Twitter. But obviously, that's not the case," Gandhi said in a YouTube video. "It is obvious now that Twitter is actually not a neutral, objective platform," he added.

A company making its business to define our politics: Gandhi

"This is not an attack on Rahul Gandhi. I have 19-20 million followers. You are denying them the right to an opinion. That is what you are doing," Gandhi went on. "A company is making its business to define our politics. And as a politician I don't like that," he added in the video, titled: "Twitter's Dangerous Game."

'Who is going to define our politics?'

The Twitter accounts of Gandhi and several other Congress leaders have been locked for sharing pictures that showed him interacting with the family of a nine-year-old Dalit girl, who was allegedly gang-raped and killed in Delhi last week. A locked Twitter account means the owner cannot tweet, retweet, or like any posts. They can only send direct messages to their followers.

Meanwhile, Bharatiya Janata Party (BJP) leaders have hit back at Gandhi over today's video. "The other day when the same company flagged @sambitswaraj (Sambit Patra) you all were celebrating forgetting that life comes full circle . You revealed the identity of rape victim. So your account has been blocked. Tell that loudly & then protest & preach (sic)," BJP's BL Santhosh tweeted.

Twitter, on the other hand, has said its rules are levied "judiciously and impartially" on all users. The company said it was alerted by the National Commission for Protection of Child Rights about content that "revealed the identity of an alleged sexual assault victim's parents." It took "proactive action on several hundred tweets that posted an image that violated our rules," the company added.