This smart speaker by Amazon can follow you around 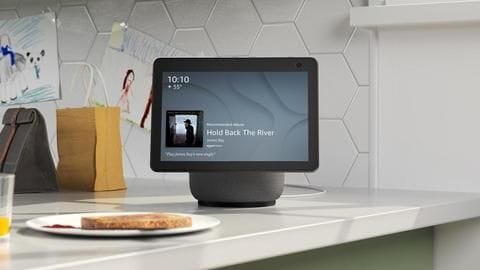 At its mega hardware event last night, Amazon made a flurry of tempting announcements. The highlight was the latest generation of Echo smart speakers, which are now spherical in shape, and the all-new Echo Show 10. They all pack various improvements over their predecessors, but the Echo Show smart display has drawn most of the attention, as it moves on its own. Here's more.

Working
Echo Show 10's base swivels at its place

Until now, every smart display in the market, whether affordable or premium, featured a screen perched to a stationary speaker. Amazon's Echo Show 10 breaks that practice with a panel that is attached to a motorized base that rotates, or should we say swivels, at its place. This way, the 10-inch display moves gradually and keeps you in focus, even as you walk around.

Working
How it recognizes where you are going?

To triangulate the location of a person and follow them, Echo Show 10 uses Amazon's AZ1 Neural Edge processor's audio localization and computer vision models. It doesn't use facial recognition to identify a person individually, Amazon clarified, noting that the device only recognizes the general shape of a person and spins around to face them, giving a good view of the screen in real-time.

Data
Data is stored locally on the device

As the base of Echo Show 10 swivels, spinning the display, the device's software will use digital panning and zooming to auto-frame your body and face appropriately, much like Facebook's Portal. Amazon has also clarified that all the data collected by Echo Show 10's 13MP camera in this panning and zooming process will be stored locally on the device instead of its cloud servers.

Other things
This will help during busiest times of the day

While many may not like the idea of a camera-equipped device tracking them, Miriam Daniel, Amazon's VP of Alexa devices, is optimistic about the prospects of the tech. She tells The Verge that the device will be useful during the busiest times of the day, like while getting ready or preparing meals, and you will not have to go back to the display.

Other things
What else Echo Show 10 has on offer?

Beyond the swiveling display, Echo Show 10 continues to be an Alexa-powered smart display at its core. It has a 2.1 audio system as well as built-in Zigbee functionality so that you can use the device as a smart home hub. Plus, there are several video services, including Zoom, Skype, and Netflix, to keep you busy and entertained at home.

Echo Show 10 will be offered in Black and White color options and is now up for pre-orders at $250 (Rs. 18,500). The India pricing and availability details of the device are yet to be announced.