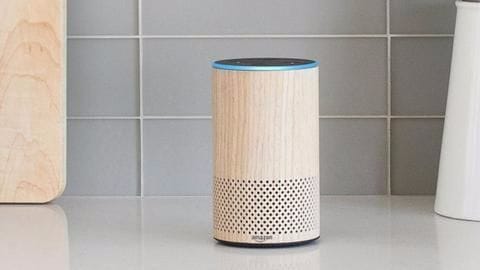 Amazon's Echo has been a money spinner for the firm with 15 million devices sold till date, as per estimates. CIRP data indicates that Amazon Echo already enjoys 75% share in the US smart speaker market. At an event held at its Seattle headquarters, the online giant has extended its Echo portfolio. Now it comes with improved sound and better voice recognition. Here's more.

Echo
What's new in the product?

Amazon had brought out the Echo smart speaker way back in 2014 and throughout these years, the design and feel of the flagship model have remained the same. However, now it has been revamped. The new Amazon Echo, instead of being tall and plastic, now has a shorter cylinder and is cloth covered, the latter can be swapped and there are six options available.

Amazon
Here's what you get

Moreover, it has also been brought up to date with Dolby audio support and dedicated bass driver. It now sports a new age microphone, which should help Alexa in picking up audio from a considerable distance and improve the entire experience as a whole. There is also multi-room audio capability, which places it in a competitive league along with other prevalent audio systems.

It has been priced at $99 (approximately Rs. 6,500), making it extremely affordable. Also, it costs $50 less than its competitor Google home. The online giant is also bundling two-packs of Echo Button (wireless push button controllers) for $19 (approximately Rs. 1247). There's also Echo Plus, which acts as a hub for setting smart devices and costs $149 (Rs. 9,784). Also, there's the Amazon Connect that costs $35 (approximately Rs. 2,298) and connects to your landline and turns its speakers into speakerphones. It also launched a new Echo Spot, which has a 2-inch, round display and is capable of showing videos, displaying clock face and making voice calls. The pocket pinch for it will be $130 (Rs. 8,536) and it will arrive in December.

Amazon also released the new Fire TV, which comes with Alexa voice remote, 4K and HDR support and Dolby Atmos. It costs $69 (approximately Rs. 4,530). Voice-assisted computing is supposed to be the next big leap in consumer technology. Then again, affordable pricing plays a considerable role in its acceptability. With the new range of products, Amazon has successfully managed to overcome that barrier.