Boston Dynamics' highly-capable (and scary) range of humanoids and robo-dogs have drawn a lot of attention lately. The machines have been seen performing a number of tricks, including things like backflips and quick jumps. But, along with featuring in viral videos, some bots made by the company have also done real fieldwork - by joining an actual police bomb squad. Here's all about it.

Boston Dynamics' Spot robo-dog, which has shown tricks like opening doors on command and carrying objects around, recently joined the Massachusetts State Police's bomb squad. The department had signed a Memorandum of Understanding (MoU) with the SoftBank-owned company to use the robot for around three months in potentially dangerous environments and situations such as an active bomb zone.

Work
But, what did Spot do?

Typically, police members use dogs to detect suspicious items, like bombs, or to track suspects. However, as Spot is a machine and doesn't have the ability to sniff stuff, the Massachusetts State Police employed it "for the purpose of evaluating the robot's capabilities in law enforcement applications, [a] particularly remote inspection of potentially dangerous environments which may contain suspects and ordinances."

Clip
Clip from when Spot was on the job 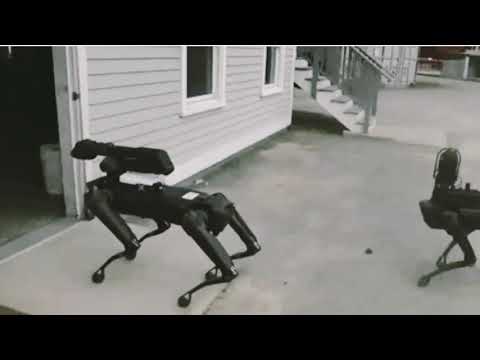 According to the MoU, revealed from documentation released by the American Civil Liberties Union (ACLU), Spot worked with the department between August and November. Some people even uploaded a clip from the time when Spot was on the 'job'. The video showed Spot opening a door of a house, presumed to be a risk zone, and inspecting it thoroughly.

Questions
Meanwhile, some people have raised question over Spot's use

While Spot was hired for the purpose of inspecting dangerous environments and helping with saving lives, ACLU members and civil rights advocates have raised questions over the oversight for such programs. ACLU Massachusetts' program director Kade Crockford told TechCrunch, "We urgently need more transparency from government agencies, who should be upfront with the public about their plans to test and deploy new technologies."

The news of Spot joining a bomb squad comes a mere few months after Boston Dynamics announced the plan to open the robot-dog for purchase. It appears that it is now being sold, although the price still remains unknown.