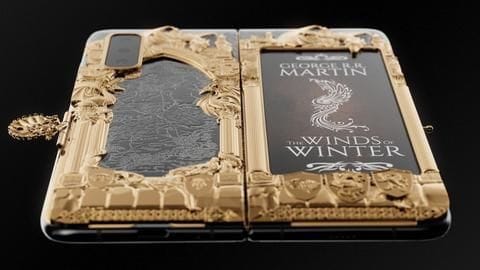 Samsung Galaxy Fold, the most popular and controversial phone of the year, is getting a GoT-specific facelift. Yes, the foldable phone is coming in a special Game of Thrones edition with all the bling in the world you could imagine. It has been crafted by luxury brand Caviar and is up for pre-orders at Rs. 5.7 lakh. Here's all about it.

Caviar has redesigned on the book-like back of Galaxy Fold with elements inspired from the GoT series and George RR Martin's upcoming novel 'The Winds of Winter.' Both back panels have been enhanced with golden elements representing the story of the famous 'A song of Ice and Fire' saga. Notably, there's also a golden clasp to make the phone look like an ancient book.

Highlights
What you get on the redesigned phone

The secondary display of the device has been beautified with golden "heraldic images of the great houses from the Seven Kingdoms" and figures representing a dragon, lion, wolf, and palace towers. Meanwhile, on the other panel, you will find an engraved map of Westeros, where most of the action takes place in the series. The whole thing is a true gift for GoT lovers!

Having said that, it's worth noting that Caviar is only changing the external design of Galaxy Fold and the internals, including the display, remain completely unchanged. The dual-display phone comes with six cameras, SD855 chipset, 12GB RAM and 512GB of Universal Flash Storage 3.0 storage. It packs two batteries for a combined capacity of 4,380mAh and supports reverse wireless charging as well.

Limited edition
Only seven iterations to be made

Caviar has confirmed that it will only make seven copies of Galaxy Fold's GoT edition (after the seven houses). They are already up for pre-orders at Rs. 5.7 lakh and will start shipping as soon as Galaxy Fold starts hitting the shelves. Notably, the company will also sell simpler leather and carbon iterations of Galaxy Fold at nearly Rs. 4 lakh per unit.

While Samsung hasn't said when Galaxy Fold would start hitting the shelves, the release date is expected to be announced soon. The device was originally slated to go on sale in April, but the company had to suspend the release owing to several manufacturing issues. In some cases, removing a plastic film damaged the phone's display while in others, it randomly went blank.