Samsung's foldable phone launched at $1,980: Here's everything to know 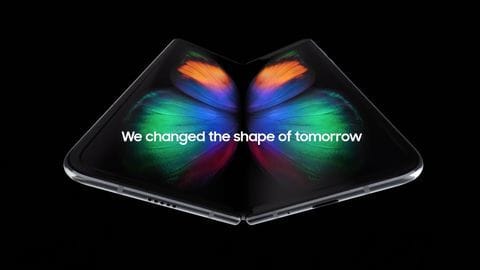 At its Unpacked event in San Francisco, Samsung has officially launched its foldable phone amid a lot of fanfare. The phone features a dual-screen foldable design, six cameras, two batteries, and top-of-the-line internals including Snapdragon 855 as well as 12GB RAM. And for all the cutting-edge technology, Galaxy Fold comes at a price tag of $1,980 (approximately Rs. 1.5 lakh). Here's all about it.

The Galaxy Fold comes with two displays: a 4.58-inch HD+ (1960x840 pixels) external screen with 21:9 aspect ration, and a foldable 7.3-inch QHD+ (2152x1536 pixels) Infinity Flex internal display which offers a tablet-like experience. The device features a new hinge system that uses "multiple interlocking gears" to create a fold that is largely concealed. Moreover, the Fold gets a plastic outer casing and a side-mounted fingerprint scanner.

To leverage both the screens, Samsung has introduced App Continuity feature which automatically opens the app in the main internal display when you switch to the tablet mode. Further, in the tablet mode, you can run three apps simultaneously for an impressive multitasking experience. Notably, Google is also working to optimize Android OS to support the foldable form factor.

In the folded state, the Galaxy Fold offers a 10MP camera which is housed above the external camera. In the unfolded position, the notch above the internal display houses a 10MP+8MP dual camera setup. Lastly, on the back, the device gets a triple camera setup comprising a 16MP ultra-wide sensor, a 12MP wide-angle sensor, and a 12MP telephoto sensor.

The Galaxy Fold is powered by the Snapdragon 855 chipset, paired with 12GB of RAM and 512GB of Universal Flash Storage 3.0 storage. It packs two batteries, one on each side of the hinge, for a combined capacity of 4,380mAh and supports reverse wireless charging as well. The device runs Android Pie, packs AKG-tuned stereo speakers, and supports LTE as well as 5G networks.