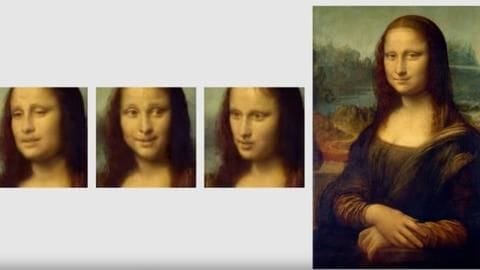 Can you imagine a centuries-old painting in an animated avatar? No? Well, Samsung has developed an eerily scary artificial intelligence (AI) model that can do just that by bringing stationary images to life with expressions. It works incredibly well and was recently tested on Leonardo da Vinci's iconic Mona Lisa. Here's everything about it.

For years, we have been seeing cases of deepfakes, AI-generated videos showing celebrity imagery over someone else's body. Such clips have raised major alarms, but they cannot be created without plenty of videos/images of the target. Now, Samsung's AI Center in Moscow and Skolkovo Institute of Science and Technology have developed an AI engine that creates fake clips with nothing but a single shot.

The technology in question learns facial landmarks from a source face and applies that data on a target face, making it do exactly what the source face does. The model needs a lot of source face data to learn, but once that's done, it can add lifelike motion to just a single frame of a person's image. Now, this is both eerie and fascinating.

Information
So, a single photo can show motion

With this technology, researchers get the capability to use a single still photo of a person's face to make them speak, turn or show facial expressions, just like any other real human being.

Though the technology is new, the researchers were able to bring iconic paintings of Einstein, Marilyn Monroe, and even Mona Lisa to life. Their faces, complete with lips and heads, moved just like a real GIF. To note, the system could only animate faces and, that too, with very inconsistent results; the quality and facial expressions in other images varied a lot.

Potential
This tech could have both positive and negative effects

The AI, when evolved into a full-fledged system, could prove both beneficial and harmful for humanity. Samsung highlighted the benefits noting that its "realistic neural talking heads" could be created and used for multi-player games, special effects industry, and video conferencing. Meanwhile, the harmful effects are obvious: misinformation and fraud; you wouldn't know if a clip you are seeing is real or not.