A humongous 15-ton battle robot is on sale on eBay 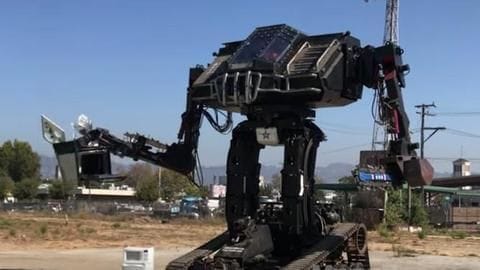 Are you up for buying a humongous battle robot? We know that sounds all sorts of crazy but if the answer is yes then you are in luck. A giant 15-ton battle mech, built by a company dubbed MegaBots, is being sold on eBay at a price little over $51,000. Here's all you need to know about it.

You may have seen mechs in movies like Pacific Rim, but this particular machine, named Eagle Prime, brings all those visions to life. The 15-ton robot uses a 430-horsepower Corvette V8 engine to swing its arms holding knives, chainsaws, and drills for regular construction works as well as to battle other mechs. It can even shoot projectiles at 130mph.

To recall, Eagle Prime had featured and won the famous giant robo-fight that took place between the USA and Japan in 2017. There was a lot of hype around the battle, which turned out to be a dull show of giant machines slowly trying to tip each other over three rounds. Japan's mech had stopped functioning, ultimately handing victory into Eagle Prime's hands.

Reason
However, now MegaBots has run out of money

Despite having an intimidating profile and significant online recognition, thanks to that fight, Eagle Prime is being auctioned. The co-founder of MegaBots said that they have run out of money and are selling the giant mech to pay back some of their debt before declaring bankruptcy. He even shared a video explaining the state of the company and the bot's auction.

Expenses
You should know expenses before getting the bot

The bidding for Eagle Prime, which was developed at a cost of $2.5 million, started at $1 on eBay and was way past $51,000 in a day. It appears to be moving at great pace, but do note that if you get your hands on this machine, it won't be easy bear the expenses of maintaining its hydraulics, tire treads, engine and other elements.