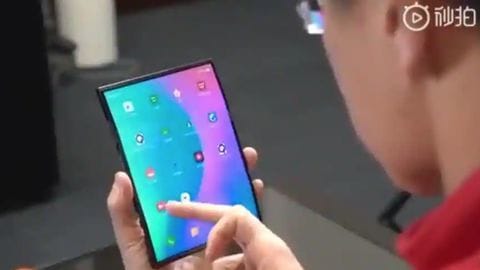 Just days after we got our first look at Xiaomi's foldable device, the company has revealed its plans to launch, what could be, the world's first dual-foldable smartphone. Xiaomi President and co-founder Lin Bin has posted a teaser video on Weibo, detailing the futuristic-looking handset, and confirmed that the company's "dual-folding phone is coming". Here are the finer details.

As seen in the video, the sides of the Xiaomi's device can be folded backward to switch from a tablet form factor into a compact phone. This is unlike other foldable devices we've seen from Samsung and Royole which fold from the center - much like a book. Interestingly, Xiaomi's 2-in-1 device appears to have a slim body, ultra-narrow bezels, and center-positioned power button.

According to the translation of Lin Bin's post (via Engadget), "After tackling flexible folding display, four-way folding hinge, flexible cover tech, MIUI adaptation, and other technical challenges, Xiaomi has made the first foldable phone, and should also be the world's first dual-folding phone." The video also highlights how the company has adapted its MIUI software to leverage the 2-in-1 form factor of the device.

Quote
Xiaomi calls its device both "practical and beautiful"

Talking about the folding mechanism and functionality of the device, Lin Bin says that the "symmetrically dual-outer-folding form factor perfectly merges the experience of a tablet and a phone," making it "both practical and beautiful." Surely, its the best foldable phone we've seen so far.

Feedback
Though the device is a prototype, Xiaomi plans on mass-production

Bin noted that though the device is "still a prototype", the company "will consider mass producing it" following positive feedback and demands from the consumers. He further added that the company has a couple of names in mind for its 2-in-1 prototype -- Mi Dual Flex and Mi MIX Flex. However, Bin concluded by saying that Xiaomi would also welcome name suggestions from consumers.