ManU vs Arsenal: Wenger's most memorable trips to Old Trafford

Arsene Wenger has already started emptying his office at Arsenal, but the 68-year-old will be hoping for one last hurrah before he bids adieu to the club he has served for 22-years. As Wenger prepares for his final visit to Old Trafford to take on Jose Mourinho's Manchester United, we take a look at the Frenchman's most iconic moments at the Theatre of Dreams. Manchester United dominated English football for years and this is the game that saw Arsenal rise as the new challengers. They called it the 'Theater of Dreams' and this is where Wenger's dream began as he knew a win at Old Trafford could define their season. Marc Overmars scored the winner for Arsenal, which gave them the momentum to win Wenger's first EPL title. Arsenal had won the FA Cup after beating Chelsea just 4 days ago, now they needed a point to end Manchester United's 3-year hold on the Premier League trophy. Winning the title at the home of the defending champions, who are also your arch rivals, was the dream. Sylvain Wiltord turned out to be Arsenal's hero as Wenger won his 2nd EPL title. This is one of the most iconic matches in Premier League history. Ruud van Nistelrooy's shenanigans led to Patrick Vieira being given the marching orders. Arsenal held on, but towards the end, United were handed a penalty and Ruud van Nistelrooy took the shot only to watch it rattle the crossbar. Arsenal players went straight to Nistelrooy to rub salt on his wounds. There is a lot more to this than just a 2-0 loss. Ruud van Nistelrooy banished his demons by scoring the penalty that would end Arsenal's 49-match unbeaten streak in the EPL. Things turned ugly after the fixture. Bad blood spilt over into the tunnel, where Wenger lashed out at Nistelrooy and Fabregas allegedly hurled a pizza at Sir Alex Ferguson. 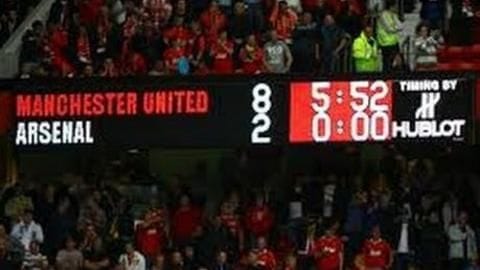 This match was where it all began to go downhill for Arsene Wenger. This is arguably the lowest point of his career. Manchester United were running riot as Wayne Rooney scored a hat-trick and Ashley Young scored a brace. Theo Walcott and Robin van Persie's strikes were the only consolation for Arsenal as the game finished at 8-2 and the score-line sums it all.