Without a doubt, WWE is the leader in the pro-wrestling market. Just like every other sport, it has its production team, backed by the official broadcaster. Technical glitches or errors are part of the production, and WWE is no stranger to it. There have been numerous instances when WWE's production team has botched up on-air, as we take a look at some.

We start the list with one of the hilarious production botches. It was at WrestleMania 10, when Owen Hart was up against his brother Bret, as he earned an epic win over him. However, the production team seemed to be so overwhelmed by his victory that they displayed his name for Alundra Blayze during her title clash against Leilani Kai. Nonetheless, both are legends.

Confusion 2.0
The Shield are not Total Divas

The gender confusion seems to be common in WWE. The second one on the list is the tag-team stable The Shield. It was in 2014 on Raw, when The Shield members were making their iconic entrance through the crowd. However, the production team played the theme of WWE's reality show, Total Divas. Interestingly, WWE edited this on its network tape. Letting people know about an anti-virus in the middle of a live TV match is a bit odd. It happened during NXT's match between AJ Lee and Nikki Bella, when the arena's PA system announced that NXT's "Avast virus database has been updated". Everyone in the arena laughed it off, including the commentators. At least we know which anti-virus does WWE use. 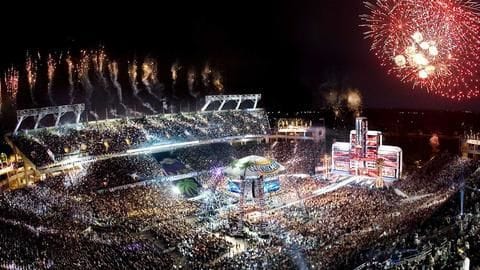 Pyros and explosives make any event look spectacular. However, it is risky dealing with these items. WrestleMania 24 saw one of the greatest pyros in WWE history. Following the main event of Undertaker defeating Edge for the World Heavyweight Championship, WWE set up an epic pyro celebration. However, the pyros soon went haywire, and some misfiring rockets landed among the crowd, injuring 45 people.

Here is the final one on the list involving the pyro. It was during the 2010 Elimination Chamber pay-per-view, when Undertaker was making his entrance. However, the production team accidentally lit the ramp fire pyro on Undertaker's way, as his gown caught fire. He immediately let go of the gown, while he suffered severe burns. The pyro-technician was fired on the spot.