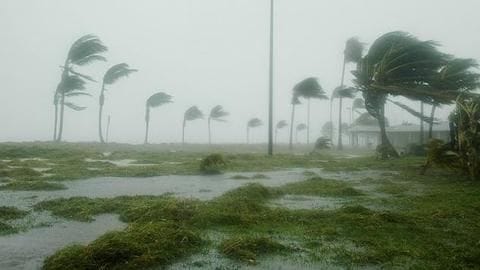 Remnants of the powerful Hurricane Ophelia battered Ireland and parts of Wales as it made landfall yesterday. Ophelia has reportedly left thousands without power. At least three people have died in storm-related incidents. Authorities have issued flood warnings and red alert as the storm is expected to hit parts of England and Scotland. What's happening on the ground? Read on to know.

Ophelia bore down on the Republic of Ireland carrying winds up to a maximum velocity of 175mph. Two people died as trees fell on their cars. A third person died in a chainsaw accident while removing a fallen tree. It has left at least 3,60,000 homes/businesses without power in the Republic of Ireland with several thousands more in Northern Ireland and Wales.

Authorities have warned people in Northern Ireland to stay inside and avoid traveling unless absolutely necessary, as streets are strewn with debris and fallen electric lines. In addition, bus and tram services have been ordered to be suspended. To "avoid any potential risk to life for children and staff," schools have been ordered to remain closed. The Army has been deployed to coastal counties.

Several flights were suspended after reports of "smoke smells" from the atmosphere, possibly with a link to Ophelia. The storm which carries dust from the Sahara, further made for an interesting spectacle as skies turned red and yellow in parts of England and Wales.

What next?
England, Scotland brace for Ophelia

Ophelia is reportedly on its way towards England and Scotland. Moreover, powerful winds of up to 120kmph continue to linger over parts of Ireland. It may be days before electricity can be restored. As a precaution, three flood warnings have been issued in England. The Scottish Environment Protection Agency has also issued a series of flood alerts and warnings for South-West Scotland.