A Minister in Pakistan's Imran Khan-led government seemingly admitted to the country's role in the 2019 Pulwama terror attack. Speaking in the Pakistan Parliament, Federal Minister Fawad Chaudhry said on Thursday, "Humne Hindustan ko ghus ke mara (We hit India on their turf)," calling the Pulwama attack a "great achievement." Over 40 Indian paramilitary troopers were killed in the Pulwama attack in February 2019.

'We're all part of Pakistan's success in Pulwama'

Chaudhry later added, 'After Pulwama, the way we struck India...'

Meri jaan hear full speech so you will know unlike #Endian definition of #GhussKMarna by using terrorism n Kalbhoshans our #GhussKMarna is when our planes target combat installations,unlike Your security doctrine we do not show Bravery by killing innocents n we condemn terrorism https://t.co/bcAcJUP5DD

What was the Pulwama terror attack?

In response to the Balakot airstrikes, Pakistan had sent fighter jets to target Indian military installations. This attempt was blocked by the Indian Air Force (IAF), however, Wing Commander Abhinandan Varthaman was captured by Pakistani forces. He was released two days later.

Chaudhry's speech was in response to PML-N leader's recent comments

Chaudhry was speaking in the Parliament in response to recent comments made by Pakistan Muslim League-N (PML-N) leader Ayaz Sadiq. On Wednesday, Sadiq spoke in the National Assembly about a Parliamentary meeting where Pakistan decided on Wing Commander Varthaman's release. Sadiq said Pakistan Army chief General Qamar Javed Bajwa was sweating and his "legs were shaking" as he entered the meeting. 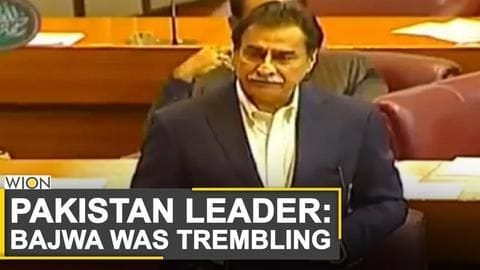 Sadiq said, "[Bajwa's] legs were shaking and he was sweating from his forehead. Foreign Minister Shah Mehmood Qureshi then told us, 'For God's sake, let [Wing Commander Varthaman] go, because India is about to attack Pakistan at 9 pm in the night." Sadiq on Thursday claimed that he was misquoted by Indian media, maintaining that Varthaman's release was "a weakness of the civilian leadership."