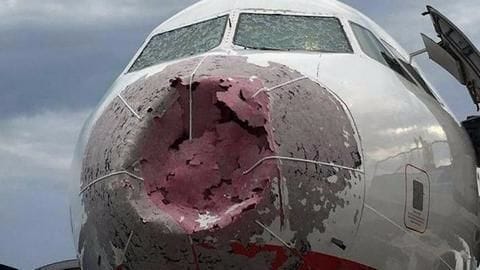 A Ukrainian pilot saved the lives of over 120 people when he safely landed an Airbus A320 whose nose got severely damaged in a hailstorm right after take-off. Captain Alexander Akopov, who was flying the AtlasGlobal jet on July 27, wasn't expecting hail the size of a "chicken egg" minutes after departure. Within 25 minutes, the plane was back at Istanbul's Ataturk airport.

What happened on July 27?

Few minutes after the plane took off, a hailstorm started and broke the windshield. Akopov said he was barely able to see the runway. He turned back. Despite the airport being shut due to bad weather, he was allowed to land. Akopov said he used the side windows while landing. "The passengers are alive. This is our professional reliability," Akopov told local media later.

"It won't be able to land!": Video goes viral

An airport employee had captured the landing on video which has gone viral. According to news reports, someone is heard saying in Ukrainian, "It won't be able to land, it won't land." Akopov will be awarded the 'Ukrainian Order for Courage' in Russia.