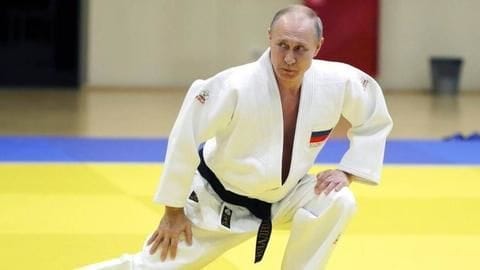 Russian President Vladimir Putin's is known for his impressive fitness profile and his love for judo. In a video that went viral recently, he was seen training along with some judo champions from Russia and knocking all of them down. However, he was taken down in the end by a female judo athlete, who was also an Olympics champion. Here's more on this.

Details
Putin trains with other athletes, does warm-ups and flips

In the video, 66-year-old Putin, who has a black belt in the martial arts, could be seen training with other athletes from the country's national judo team in Sochi, host of 2014 Winter Olympics. The 90-second video shows the President doing warm-ups and flips. He then begins taking down other athletes with his quick judo moves and his short wins are spectacular to watch.

Some of the men Putin put down were one of the most-skilled Judokas like Olympics champion Ivan Nifontov. At the end, he went against Rio Olympics 2016 champion, Natalia Kuziutina, who bagged a bronze medal in the Olympics. And the two had a nail-biting match, with Natalia finally beating Putin by taking him over her head. Putin also suffered a minimal injury in this.

After the session, Putin, like a true sportsman congratulated the winner and also kissed her on the head. Natalia told media, "Thank you President Putin that after such complex negotiation at the summit he found time for a full-scale quality training." She added that she was glad to be "a sparring partner of the first judoist of our country."

Putin is a judo enthusiast and had dubbed judo as his "favorite sport." As per reports, he practises it whenever he gets time and there are several photographs available of him taking down national champions with ease on the mat over the years. Moreover, the President has been seen taking part in many other sports such as ice hockey and horse riding.